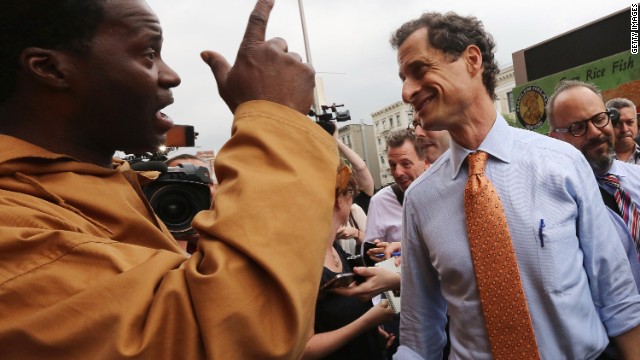 (CNN) - A little more than a month after entering New York City’s high-profile mayoral race, Anthony Weiner has inched ahead for the first time in the crowded Democratic primary, a new poll indicates.

The former congressman has support among 25% of registered Democrats, with City Council Speaker Christine Quinn, the longtime front-runner in the race, coming in at 20%, according to a survey released Tuesday by the Wall Street Journal, NBC New York and Marist.

Weiner made a dramatic re-entry into politics last month after spending two years out of the limelight. The former congressman resigned two years ago in his seventh term after being caught and admitting to sending lewd messages to women via social media.

Quinn held a strong advantage over Weiner as recently as May 22, when a Quinnipiac University survey showed the city council speaker in the top spot at 25% among registered Democrats and Weiner behind at 15%. The same poll showed that nearly half of New Yorkers at the time didn't think Weiner should enter the race.

Although he trailed Quinn in the polls when he announced his run, Weiner’s support has increased steadily during the race. Quinn, on the other hand, has seen her numbers decline, with 20% marking her lowest level of support since polling began.

In the new survey, Weiner has the lead over Quinn among male Democrats, 29% to 19%, and a slight edge over his opponent among female Democrats, 22% to 21%. The latter is well within the survey's sampling error of plus or minus 3.7 percentage points.

For the survey, 689 Democrats were questioned by telephone from June 17 to 21.

Democrats face off in a September 10 primary, with the general election taking place November 5.

In a city where Democrats greatly outnumber Republicans, the winner of the Democratic primary would be considered the favorite in November's race. Recent polls have showed the Democratic nominee with an advantage over the Republican pick in hypothetical matchups.

- CNN’s Ashley Killough and Paul Steinhauser contributed to this report.