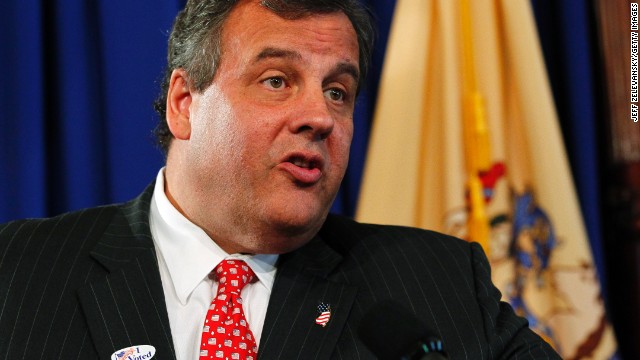 (CNN) – New Jersey Gov. Chris Christie took a swipe at Hillary Clinton’s sports loyalty on Wednesday, saying the former senator from New York pretended she was a Yankees fan when she ran for office in the state.

During a wide-ranging interview with New Jersey 101.5 radio, Christie also defended his decision to order flags at state buildings to fly at half-staff after the death of actor James Gandolfini, a New Jersey native.

Christie, who’s considered a potential presidential contender, made headlines last week when he reiterated his passion for the Dallas Cowboys, rather than either of the two football teams that play in his state-the New York Jets and the Giants–or the nearby Philadelphia Eagles.

Defending himself, Christie argued that he was a fan of the Cowboys as a child–and once you’re a fan, you never abandon ship.

“I'm not going to be Hillary Clinton, OK? I'm not going to, you know, be a Cubs fan my whole life, and then when I go to run for office in another state, pretend I'm a Yankee fan. I don't think there's anything–in sports–more reprehensible than that."

While campaigning for the U.S. Senate in 1999, Clinton said she had always been a Yankees fan, despite growing up in Chicago and formerly showing support for the Cubs. When pressed about the switch, Clinton explained that she was enamored with the Yankees as a child and needed an American League team to support, in addition to the Cubs.

Christie, like some at the time, didn’t buy it.

While Christie took the same shot at Clinton in 2010, the governor has yet to make such a jab at the former secretary of state since they've both found themselves in the same bucket of 2016 speculation.

“You got to stick with the team you rooted for as a kid,” he said. “Especially a politician, you don't change it for political reasons.”

Also during the interview, Christie said he wasn’t surprised when some critics blasted the governor’s decision to fly state flags at half-staff Monday in New Jersey for the “Sopranos” star. Gandolfini, 51, died last week from a heart attack while on a working vacation in Rome.

The Republican governor said he caught even more flak for lowering the flags for Whitney Houston after her death last year. Christie also ordered flags at half-staff for musician Clarence Clemons when he passed away in 2011.

“These are people in my view who have made enormous cultural contributions to the life and the image of this state, and I think they merit being recognized,” he said. “It's not demeaning anybody else or trying to equate their contributions with anybody else's contribution.”

Christie said he’s proud of the gesture and added he’ll be proud to present a flag on Thursday at Gandolfini’s funeral in New York.

Later during the radio segment, a caller asked Christie if he had a formula for determining when to fly flags at half-staff.

Christie said he solely relies on his own judgment.

“If you had another governor here, he or she might judge it differently,” he said. There's no formula. I don't go and make up a pro and con list. I don't have a calculator or an abacus that I use to calculate value. It's a gut judgment that I use on my part. Some people agree and some people disagree ... but I'm the governor. I make the choice.”