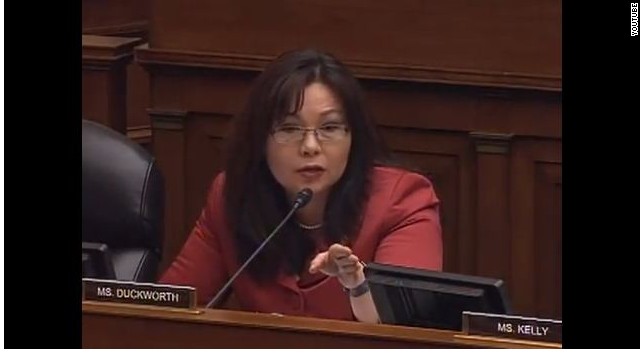 The witness, Braulio Castillo, had come under scrutiny from the House Oversight and Government Reform committee for allegedly claiming veteran disability status as a way to gain an advantage in contracting bids for the Internal Revenue Service.

Castillo, president and CEO of an IT company called Strong Castle, reported a foot injury he sustained in 1984 at the U.S Military Academy Preparatory School, according to a report released by the committee. He was honorably discharged in his first year at the school, and later went on to play football at the University of San Diego as quarterback and linebacker.

Seeking to acquire a Service-Disabled Veteran-Owned Small Business credential–designed by the Small Business Administration to help veterans apply for federal contracts–he listed his injury as his qualification. After reporting ongoing pain and treatment for his foot, Castillo was granted a 30% disability rating by the Department of Veterans Affairs, with the highest rating for injuries below the knee being 40%.

Duckworth, D-Illinois, asked Castillo Wednesday if he believed the level of his disability rating was fair and accurate, to which he replied, "Yes ma'am, I do."

"My right arm was essentially blown off and reattached," she said. "In fact, we thought we would lose my arm and I'm still in danger of possibly losing my arm. I can't feel it. I can't feel my three fingers."

"My disability rating for that arm is 20%," she added.

"Shame on you. You may not have broken any laws...but you certainly broke the trust of this great nation. You broke the trust of veterans. Iraq and Afghanistan veterans, right now, are waiting an average of 237 days for an initial disability rating and it's because people like you who are gaming the system are adding to that backlog so that young men and women who are suffering from post-traumatic stress, who are missing limbs, cannot get the compensation and the help that they need."

She gave an example of a former Navy Corpsman whose leg was knocked off by an RPG. She said he put a tourniquet on himself and kept moving into an ambush.

"He played through the pain," Duckworth said, taking a swipe at Castillo's time playing football in college after hurting his foot. "You did not. You took advantage of the system....You, who never picked up a weapon in defense of this great nation, very cynically took advantage of this system. You broke the faith of this nation."

Duckworth also read aloud an excerpt from the report, in which Castillo had described his injury to a VA official through email.

"My family and I have made considerable sacrifices for our country," he wrote. "My service connected disability status should serve as a testimony to that end. I can't play with my kids because I can't walk without pain. I take twice daily pain medication so I can work a normal day's worth. These are crosses that I bear due to my service to our great country."

He went on to ask for the certification so that his "sacrifices and investments are not [sic] and that I can provide for my family."

Duckworth, however, cringed at the email and expressed disgust with Castillo's attempt to claim the injury.

"If this nation stops funding veterans' health care and calls into question why veterans deserve their benefits, it's because cases like you have poisoned the public's opinion on these programs. I hope that you think twice about the example that you're setting for your children."

"Twisting your ankle in prep school is not defending or serving this nation, Mr. Castillo," she added.

Duckworth, who acknowledged she had gone over her allotted time, yielded the session back to committee chairman Darrell Issa, R-California.

"I thank the gentlelady," Issa said. "And the time was well-spent."

The committee had also called into question Castillo's personal friendship with an IRS official as he attempted to obtain the contract.

In written testimony for the hearing, Castillo defended his actions, saying he was simply seeking benefits that were being offered by the administration in his quest to win a bid with the IRS.

"Strong Castle has not sought nor has it received any unfair advantages in its pursuit of any government contract," he testified.

He also blamed other small businesses for trying to unfairly pin Castillo in a competitive bid environment.

"We believe that they have used the bid protest process...to gain business advantages by spurious claims about our qualifications and contracting practices."