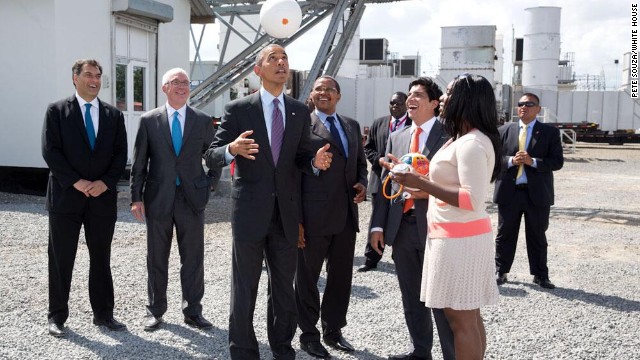 Obama shows off his 'Soccket' moves

Traveling with President Jakaya Kikwete of Tanzania on Tuesday, Obama toured the Umbungo Symbion Power Plant, where they saw a demonstration of the power-generating "Soccket" ball.

The soccer ball uses the kinetic energy from play to provide a source of renewable, off-grid power. It was invented by Unchartered Play co-founder Jessica Matthews, a dual citizen of Nigeria and the United States, Julia Silverman when the two were students at Harvard College.

As Matthews explained how it works, Obama took a white Soccket ball, which has a plug on it for a power cord, and dropped it to his feet to kick it back up to his hands. Prodded by some cameraman that he can do better than that, the president then tossed it higher and head-butted the ball to himself, according to press pool reports.

Check out Barack Obama getting a kick out of the @SOCCKET in Tanzania! pic.twitter.com/JQ3B5xrqii

Obama walked over to the media to explain what he learned about the ball.

"There is a mechanism inside so that the kinetic energy, when you kick the ball, creates a battery. So now you can power this," Obama said.

With a cable, he connected the ball to a cell phone.

"You can play with this for two hours and now you've got half an hour's worth of, an hour's worth–," Obama said, before someone familiar with the technology interjected.

Later in a speech, the president said he thought the ball was "pretty cool."

"The Soccket turns one of the most popular games in Africa into a source of electricity and progress. You can imagine this in villages all across the continent," he said.

The president concludes his three-country trip to Africa when he departs later Tuesday to return to the U.S.