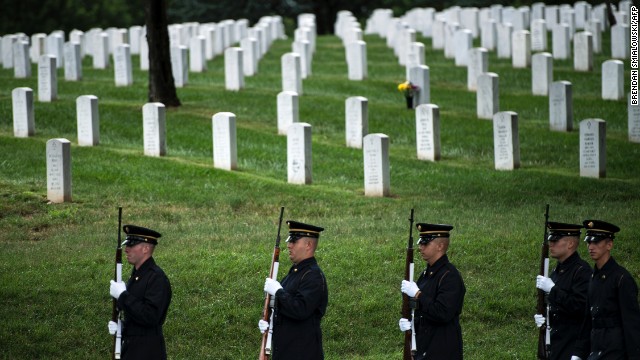 Morsy, a Western-educated Islamist elected a year ago, "did not achieve the goals of the people" and failed to meet the generals' demands that he share power with his opposition, Egypt's top military officer, Gen. Abdel-Fatah El-Sisi, said Wednesday in a televised speech to the nation. Adly Mansour, head of the country's Supreme Constitutional Court, replaces Morsy as Egypt's interim president, El-Sisi said. – Ben Wedeman, Jethro Mullen and Chelsea J. Carter

JAKE TAPPER READS BETWEEN THE LINES: President Barack Obama's statement about the Egyptian military's seizure of power is as telling for what he doesn't say as for what he does: he doesn't mention the word "coup." He doesn't call upon the military to restore power to "the democratically elected civilian government," but rather to "a democratically elected civilian government." In other words, it need not be deposed President Mohamed Morsy's. – Jake Tapper

DEMOCRACY IN ACTION: President Obama to address the nation at 6 p.m. ET, watch on CNN.

SNEAK PEEK OF “STATE OF THE UNION”: Candy Crowley in an interview with Joint Chiefs Chairman Gen. Martin Dempsey… “I feel confident that we have a close enough relationship that they listen,” Dempsey said before the coup of Mohamed Morsy. “You know, at the end of the day it’s their country and they will find their way, but there will be consequences if it is badly handled.”

GUT CHECK DVR: The entire interview with air on CNN on Sunday on at 9 a.m. ET.

TRAIL TRIVIA
(Answer below)
How many presidents have died on Independence Day? Name them.

So why hasn’t Bush lashed out at Obama and defended himself? Why, instead, has he regularly pledged to remain mum on the Obama presidency?

“George W. Bush is a traditionalist,” David Gergen, CNN’s senior political analyst said. “I think he holds to an old-fashioned standard that the presidency is one of the world’s greatest fraternities and its members don't criticize each other.”

The President’s Club – as it has come to be known, largely because of a book by Nancy Gibbs and Michael Duffy – has an unwritten policy of not in public, only in private. When you are president, there are literally only a handful of people in the world who can relate to the pressure, the commitment, the arduous decision making. This unique understanding has led many presidents to rely on one another after leaving office.

Like most clubs, the President’s Club has its rule breaker. Enter: Jimmy Carter.

Carter has become known for giving biting criticism of his successors. In 2007 he said the Bush administration had been “the worst in history.” In 2013, he critiqued Obama’s handling of North Korea and Iran. And in 2001, he labeled the Clinton presidency as “disgraceful,” primarily for Clinton’s pardoning of fugitive Marc Rich.

“Carter puts issues ahead of fraternity and will often speak out about things,” Gergen said. “I think it is part of his nature. Maybe being a one-term president changes your view.”

Leading Drudge: Military Coup In Cairo
The head of the constitutional court has been sworn in as Egypt's interim president, a day after the overthrow of the country's first democratically elected leader, Mohamed Morsi. Adli Mansour took his oath of office under an army transition plan in a ceremony that was broadcast live on state television. Sky News

Leading HuffPo: Fuel To The Fire: Gop Sounds Alarm On 'Worst Of All Worlds'
Republicans seized upon the administration's abrupt delay of the employer mandate in the health care law as fresh evidence that President Barack Obama's signature domestic policy is unworkable and should be repealed, an argument that energizes the party base ahead of 2014 congressional elections. – Donna Cassata for AP

Leading Politico: W.H. greases Obamacare squeaky wheels
The delay of Obamacare’s employer coverage rules is giving the critics plenty of new ammunition — but that doesn’t mean the sudden movement is out of character for the administration at all. It’s just the latest example of a pattern with the implementation of Obamacare: The Obama administration almost always listens to the squeaky wheel. – David Nather

Leading The New York Times: Postponing Health Rules Emboldens Republicans
Republican leaders called for investigation into the delay and some said the White House was trying to help Democrats by postponing the changes until after the midterm elections. – Jackie Calmes and Robert Pear

- Before Coup, relationship with Egyptian military seen as strong, says Dempsey -
JOINT CHIEFS CHAIRMAN MARTIN DEMPSEY IN AN INTERVIEW WITH CNN’s CANDY CROWLEY TO AIR SUNDAY: “To your question about the nature of the relationship with the Egyptian armed forces, it was actually trending even more strongly than it had been for maybe the last ten years, because we'd committed to that, to try to help them find their way in a new system because it had been, you know the armed forces ran the country for several decades, and they were transitioning themselves to their role in a democracy.” …
CROWLEY: “When you look at what's going on on the streets in Egypt, and has been for the past several days, what is the U.S. stake in that?”
DEMPSEY: “Well at one level our stake is we probably have 60,000 or so dual American-Egyptian citizens in Egypt and we have several hundred official American citizens serving in Egypt, and our immediate stake in encouraging all sides to deal with this peacefully is the protection of our American citizens. But more broadly, look, Egypt is a great country. It's a cornerstone of the Middle East. It's got an incredible history and culture, and the world needs Egypt to be stable.”

- The book that scorches Washington as ‘Suck up City’ -
MARK LEIBOVICH IN HIS NEW BOOK “THIS TOWN”: “To say that today’s Washington is too partisan and out of touch is to miss a much more important truth — that rather than being hopelessly divided, it is hopelessly interconnected. It misses the degree to which New Media has both democratized the political conversation and accentuated Washington’s myopic, self-loving tendencies.”
MARK LEIBOVICH ON ‘FATHERHOOD’ IN HIS NEW BOOK “THIS TOWN”: “You hear the formulations ‘He’s like a father to me’ and ‘He’s like a son to me’ quite a bit in Washington. Politicians like to self-mythologize through their fathers: John Edwards was ‘the son of a millworker,’ John Boehner ‘the son of a barkeeper’ and so on. ‘Every man is trying to either live up to his father’s expectations or make up for his father’s mistakes,’ Barack Obama wrote. The dad thing makes a tidy device for any politician’s story, but the prevailing social dynamic of Washington so often does mimic the quest for paternal love. It is, in many ways, a city of patrons and protégés. ‘Who do you work for?’ is often the first thing people ask here.”
“THIS TOWN” EXCERPT IN THE NYT MAGAZINE

@ThePlumLineGS Clearly the White House is worried or they wouldn't have delayed the employer mandate. But we'll see. Happy 4th.

FYI: e-mail has arrived from Lanny Davis, noting (fearing?) exclusion from #ThisTown. I apologize for this oversight.

Happy 4th of July! Thank you @BuzzFeed for reminding me of my awkward yrs, inc. my 4th of July worthy shades #TBT pic.twitter.com/X175JgkP8U

#OnePercentProblems RT @JayLow: There are so many things I wish I could tweet that I just CANNOT

The main ingredient in a hot dog is usually a 'paste-like poultry product' | http://t.co/O5LCgE3ix1

Adams and Jefferson, two men whose lives were tied poetically, both died on July 4, 1826. The second and third president, Adams and Jefferson were brothers-in-arms during the Revolutionary War, but their relationship soured when they politically squared off against one another.

Years before they died, though, the duo grew close once again and exchanged some incredibly thoughtful and introspective letters.

The Jefferson-Adams story has become a popular American anecdote. It has been remembered in television series such as The West Wing and HBO's miniseries "Adams."

Monroe, the fifth president of the United States, died on July 4, 1831.

Congrats to Patrick Millsaps (@PatrickMillsaps) for correctly answering today’s trivia question. He gets to cut to the front of the BBQ line today. Truck yeah, Millsaps.