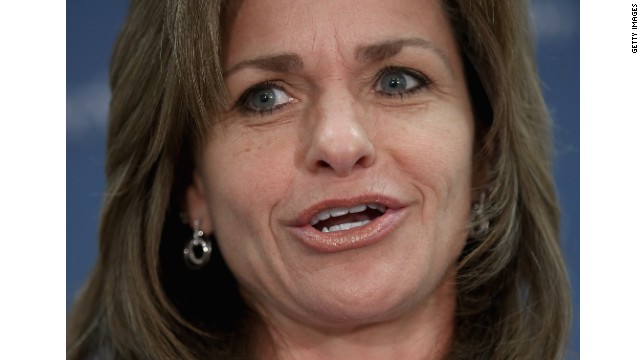 (CNN) - Rep. Lynn Jenkins, R-Kansas, faulted Senate Democrats on Saturday for this week's hike in student loan interest rates and urged the upper chamber to pass legislation that resolves the issue as soon as the holiday recess ends.

"For too long, politicians have been in charge of setting these rates, and we keep coming back to cliffs and deadlines like this one," Jenkins said in the GOP weekly address. "Paying for college is difficult enough without all this uncertainty. I have two kids in college, I know how hard it can be."

The interest rates on some student loans officially doubled Monday - to 6.8% from 3.4% - after the Senate failed to reach a compromise by the July 1 deadline.

The hike hits about seven million new subsidized Stafford loans this year for middle- and low-income students, but does not apply to existing loans.

Negotiators are stuck largely on the question of whether to require an overall cap above which interest rates on new loans could not rise.

Top Senate Democrats want a cap in place to protect students if interest rates spike. That is at odds with the slightly different proposals from President Barack Obama and various congressional Republicans, which are tied to 10-year Treasury bond rates and would include charges for administrative costs but would not include caps.

Republicans, who prefer a more market-based approach, often point out that the White House's proposal falls more in line with their own.

"When President Obama proposed letting the markets set interest rates instead, the Republican-led House passed a bill reflecting his plan," Jenkins said. "Republicans in the Senate came to the table with similar ideas. Unfortunately, Senate Democrats attacked the president's plan, refused to work with us, and allowed this rate hike to take effect, leaving for the July 4th holiday without passing a solution."

Senators worked through last week to try to reach a deal, but lawmakers from both parties ultimately predicted an agreement would not be made in time.

Nevertheless, many of those same senators said they hope to finalize an agreement shortly after the break and have it apply retroactively so students are not hurt by the temporary hike.

Another disagreement centers on whether the legislation is revenue-neutral. Senate Democrats say the government should not earn any money or pay down the deficit from the loans they provide, something that would happen under the other proposals.

"Republicans continue to insist that we reduce the deficit on the backs of students and middle-class families," Adam Jentleson, a spokesman for Senate Majority Leader Harry Reid, said a week before the deadline.

- CNN's Ted Barrett and Ashley Killough contributed to this report.