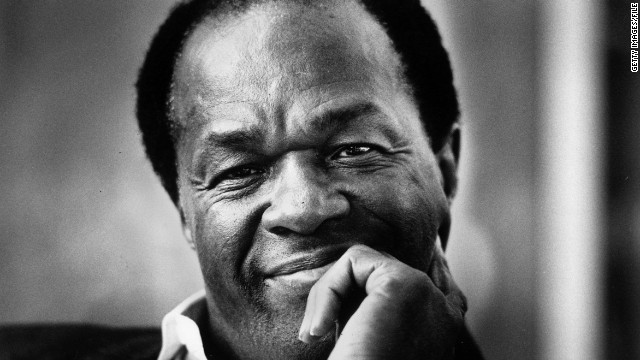 “I CAN IDENTIFY WITH THEM”: Former D.C. Mayor Marion Barry tells us what he thinks about Eliot Spitzer and Anthony Weiner’s attempted comebacks. Scroll down to What Caught Our Eye for more.

PERRY SAYS NO TO FOURTH TERM: Texas Gov. Rick Perry said Monday that he won't run for re-election next year for an unprecedented fourth full term. “The time has come to pass on the mantle of leadership,” he said. The announcement by the Republican governor opens the door to speculation that Perry will make another bid for the White House in 2016.

DEATH ON THE STREETS OF CAIRO: Top Egyptian security officials defended army and police actions in the clashes on Monday in Cairo that led to the deaths of more than 50 people, saying they were defending the Republican Guard headquarters against attackers. Health Ministry official Khaled al-Khatib put the number of fatalities at 51 and said 435 others were wounded when Egyptian security forces clashed with supporters of deposed President Mohamed Morsy and the Muslim Brotherhood outside the headquarters. – Karl Penhaul. Joe Sterling and Ali Younes

TRAIL TRIVIA
(Answer below)
What U.S. state was the first to abolish slavery?

“I can identify with them,” Barry said. “I know what people are going through who have fallen, people who have stumbled. I went through some of it, in a different way.”

Come September, Democratic voters in New York will have a big question to answer when they go to the ballot box: Are they prepared to give two men a chance at political resurrection?

Two men, one ballot and a wealth of ethics questions to be answered.

After Barry’s brushes with the law – a 1990 drug conviction, a six-month jail sentence, and a 2005 guilty plea to misdemeanor tax charges – voters in Washington were asked those same questions and Washingtonians opted to give the former mayor a second chance.

He served four terms as mayor, until 1999, and has been on the D.C. Council since 2002. Furthermore, a 2012 poll showed that Barry, a veteran of the Civil Rights movement who was first elected to public office in the 1970s, was most popular local politician in the District of Columbia.

History is littered with political comebacks, and with so many out there, the question is: is there a roadmap for mounting one? If there is, Barry has the answer. And while it may be surprising, Spitzer and Weiner could learn a thing or two by asking a simple question: what would Marion do?

“If you find yourself in a hole, the first thing you do is stop digging. And then you try and find out how you get out of that hole,” Barry said, stressing that both Weiner and Spitzer need to show that while they are remorseful, they have a vision.

To this day, Barry denies that he ever had a political scandal and instead chooses to label his drug charges as the time the government tried to entrap him. Barry said his situation is different than Spitzer or Weiner.

When we interviewed Barry last year he reminded us that it helps to be blunt: “I didn't run to be pope, I ran to be mayor,” said Barry.

Leading CNNPolitics: Has the road to political redemption gotten shorter?
In this age of lighting fast news cycles and fleeting memories, are disgraced politicians sitting in the penalty box for a shorter time before launching a comeback? – Paul Steinhauser

Leading Drudge: Rick Perry Rides
Rick Perry, the longest-serving governor in Texas history who famously muttered "oops" after forgetting during a 2011 presidential debate the third of three federal departments he'd pledged to close, announced Monday he won't seek re-election next year to a fourth full term. – Will Weissert for the AP

Leading Politico: Clinton's answer to the has-been charge
Republicans in search of an attack line against Hillary Clinton have begun to cast her as a tired relic of the past — an implicit contrast to their own bench of up-and-comers like hip hop-listening Marco Rubio and libertarian-leaning Rand Paul. But Democrats are confident that giving voters the chance to make history by electing the first female president — by definition a forward-looking act — would trump any argument that Clinton is too 20th century and give her a “change” mantra of her own. – Maggie Haberman

Leading The New York Times: In Congress, Gridlock and Harsh Consequences
A deadline used to mean something in Congress, but amid signs of deep dysfunction, lawmakers have been unwilling or unable to act on matters of consequence to a wide range of Americans. – Jonathan Weisman

- Will the U.S. immediately cut off aid to Egypt? -
PRESS SECRETARY JAY CARNEY AT THE WHITE HOUSE PRESS BRIEFING: “We think that would not be in our best interest.”

- Emanuel holds 90 minute meeting on Chicago gun violence -
CHICAGO POLICE SUPERINTENDENT GARRY MCCARTHY AT A BRIEFING WITH REPORTERS, ACCORDING TO THE CHICAGO TRIBUNE: “He wants to know what's going on, just like I want to know. This past week, we're disappointed where we had 11 less shooting incidents that resulted in the same number of murders as last year. We focus on reducing shooting incidents and the murder rate follows.”

Gut Check Full Service: Gangs, weather, access to guns, reluctant witnesses drive holiday weekend bloodshed… This year’s Independence Day celebration, for many Chicagoans a four-day respite in the land of the free, was for others an ordeal in a killing field. The Chicago Sun-Times has counted 38 separate shooting incidents since 6 p.m. Wednesday. – David Roeder, Michael Lansu and Sam Charles for the Chicago Sun Times

- Snowden and the compounding excesses of prior governments -
EDWARD SNOWDEN IN AN INTERVIEW WITH THE GUARDIAN: “Now I have watched and waited and tried to do my job in the most policy driven way I could, which is to wait and allow other people, you know, wait and allow our leadership, our figures, to sort of correct the excesses of government when we go too far, but as I’ve watched I’ve seen that’s not occurring and in fact we’re compounding the excesses of prior governments and making it worse and more invasive, and no one is really standing to stop it.”

- Bon Jovi appears with Christie for storm relief -
ROCK STAR AND NEW JERSEY NATIVE JON BON JOVI AT AN EVENT WITH NEW JERSEY GOV. CHRIS CHRISTIE: “My being here is not political. It's emotional because I grew up here. I went to school here. I met my wife here," he said at an event held to announce a donation. "And in the days following the storm, when I visited these streets and spoke to the residents, one thought that came to me time and time again was what can I do?”

intrigued by how hard it is for some pols to stay away: newt & santorum run for pres; kerrey runs for neb senate; spitzer runs for city job

Based on what's happening in NYC, I'm looking forward to the Corzine-McGreevey primary in NJ.

We pray for a heart which will embrace immigrants. God will judge us upon how we have treated the most needy.

Cory Booker "is fond of retweeting just about anyone who has something nice to say about him." http://t.co/E1YrTux2EW

USA! USA! Not the fattest in the world anymore. That honor belongs to Mexico. http://t.co/1CMdskQwM4

You'll watch this story, "Carry On," for 20 minutes – and wish for 20 more. Incredible, inspirational people. http://t.co/aBtXy0JuVY

After breaking away from New York and ratifying its own state constitution, Vermont waited no time to abolish the practice of slavery.

On this day in 1777, in the first Chapter of its constitution, the state of Vermont declared that “all men are born equally free and independent,” making it the first state to abolish the practice.

"No male person, born in this country, or brought from over sea, ought to be holden by law, to serve any person, as a servant, slave or apprentice, after he arrives to the age of twenty-one Years, nor female, in like manner, after she arrives to the age of eighteen years, unless they are bound by their own consent, after they arrive to such age, or bound by law, for the payment of debts, damages, fines, costs, or the like," the constitution reads.

Vermont was later admitted to the Union in 1791.

According to the 2010 census, only 1 percent of Vermont is African American, making the first state to abolish slavery one of the least diverse.