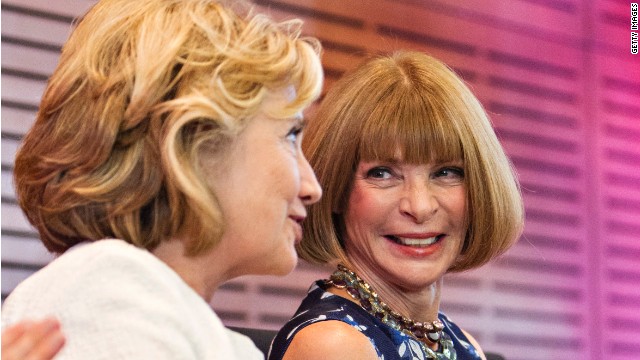 "I can only hope that all of you here in Little Rock will be celebrating her come November 2016," Wintour said, according to CNN affiliate KARK.

"Just as all of us, all of us at Vogue, look forward to putting on the cover the first female president of the United States," she continued, as she introduced the former first lady and U.S. senator from New York.

Hillary Clinton, widely considered the potential Democratic favorite in 2016, has not said whether she plans to launch another White House bid.

For her part, Wintour has become more of a political power player in recent years and became a major fundraiser for both of President Barack Obama's presidential campaigns. Her ties to Obama sparked rumors that she was up for a potential ambassadorship, but CNN did not confirm those reports and she remains in her top post at the magazine.

The Oscar de la Renta reception, held at the William J. Clinton Presidential Center in Little Rock, displayed several of the designer's famous pieces, including the teal pantsuit Clinton wore when first being sworn-in as U.S. senator in 2001.

De la Renta, 80, also designed Clinton's dress for one of her husband's inaugurations, as well as for a 1998 Vogue photoshoot–the first time a first lady appeared on the magazine's cover page.

The Clintons have remained close with de la Renta ever since, and the designer has been the mastermind behind many of Hillary Clinton's suits and gowns during her public service career.

"I never got to wear one of his dresses," former President Bill Clinton said. "But I have every day for many years worn the mantle of his friendship."

She again offered more praise for the famed designer on Monday.

"It's not for me just about the clothes, although they're really spectacular, it's about what it means, the continuous effort to be as good as you can be," Clinton said.

"I am overwhelmed at the fact that my very first retrospective happened to be at the President Clinton Library," de la Renta said.

Clinton was also in Little Rock Monday to attend the dedication of a new children's library named in her honor.