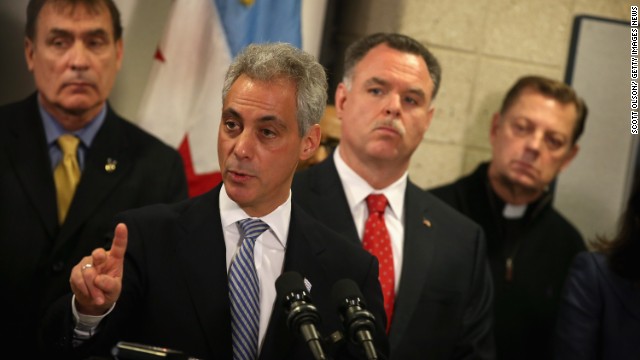 GONE IN 2014: Press Secretary Jay Carney said at the White House briefing on Tuesday that no decision on troop reduction in Afghanistan is imminent, and left open the idea that keeping no troops beyond 2014 is still an option. “We are not committed to troop presence just for troops there,” Carney said. Carney said that the government is committed to bringing the troop level down by 2014 when combat operations are slated to end. Carney said the presence after that time is a matter still being negotiated with the Afghan government.

BUT IS HE BLUFFING? There's no doubt that President Barack Obama has had his fill of Afghan President Hamid Karzai's on-again, off-again negotiations on how many U.S. troops would remain there after 2014. And there's no doubt that the relationship continues to deteriorate, CNN Chief National Correspondent John King said. “So If Karzai doesn't trust his own security forces, you lay this down that we might come back to a zero option, maybe you snap him into thinking, ‘I'd better get to get back to the negotiating table here,’” King said.

TRAIL TRIVIA
(Answer below)
Why did Congress honor President Franklin Delano Roosevelt by putting his face specifically on the dime?

A few weeks ago, Chicago Mayor Rahm Emanuel was credited with turning the tide on his city's chronic gun violence epidemic.

“Chicago Tactics Put Major Dent in Killing Trend,” trumpeted the New York Times in early June. At around the same time, a Time magazine cover profile about Emanuel headlined “Chicago Bull” by David Von Drehle said changes Emanuel “has made in the police department have put a dent in crime.”

What a difference a month can make.

In the past week with the weather getting warmer, gun violence has riddled Chicago streets. From Wednesday to Sunday over the July 4th weekend, more than 70 people were shot and 11 died, according to the Chicago Tribune. Three more people were shot and killed last night on Chicago's West Side, according to the Tribune. Among the dead: a 15-year-old boy.

For Emanuel and Chicago, the headlines – and positive narratives – are changing.

Comparing Chicago to the Dante Aligheiri's “Inferno,” a 14th century novel that describers the horrors of hell, the Tribune's editorial on Tuesday seems to capture the horror coming from the Windy City.

“Dante's ‘Chicago,’ were he to write it today, would tell of a city understanding the vicious nature and impact of each shooting,” the editorial reads. “Law-abiding Chicagoans unable to escape the relentless gunplay on their streets would ruefully identify with the inscription on the gate to Dante's allegorical hell: ‘Abandon all hope, ye who enter here.’”

In light of the weekend’s violence – and after a 90-minute meeting with police on Monday – it appears Emanuel has a renewed urgency on crime.

In order to pass stricter gun laws, Emanuel has called a special session of the City Council for next week. His hope, he said, is the council will vote on an updated assault weapons ban and approve stiffer penalties for those who commit gun crimes.

When asked why it was so urgent to call a special session, Emanuel said “we had a stark reminder over the weekend.”

Leading CNNPolitics: Student loan fight heats up as Congress returns from break
House Republican leaders returned to Capitol Hill on Monday after a one-week break and immediately blamed Senate Democrats and the White House for a hike on interest rates for an estimated seven million students who plan to take out government-subsidized loans this year. – Deirdre Walsh and Ted Barrett

Leading Drudge: NYPD Releases Gas In Subway For Attack Drill
The NYPD is releasing harmless gases into the subway system during the morning rush beginning Tuesday to study how chemical weapons could be dispersed through the air. NBC NY

Leading Politico: Why sex-scarred pols keep coming back for more
Another week and there goes another fallen officeholder trying to claw his way back from tabloid purgatory — another chance for some people to marvel about the power of forgiveness and redemption, and other people to marvel about the power of egomania and pure chutzpah. It is one more occasion, in other words, for the vast majority of people who would stay crouched in a hole for years if they ever endured humiliation and disgrace of the sort Eliot Spitzer brought down on himself to wonder: What makes these guys tick? – John F. Harris and Alexander Burns

- Obama’s FBI nominee defends FISA courts -
JAMES COMEY JR., OBAMA’S NOMINEE FOR DIRECTOR OF THE FBI, AT HIS CONFIRMATION HEARING: “In my experience, which is long, with the FISA court, folks don't realize that it's a group of independent federal judges who sit and operate under a statutory regime to review requests by the government to use certain authorities to gather info and it is anything but a rubber stamp. Anyone who knows federal judges and has appeared before federal judges, knows that calling them a rubber stamp shows you don't have experience before them.”

- House to vote on Obamacare repeal… again -
HOUSE SPEAKER JOHN BOEHNER IN A PRESS CONFERENCE ON CAPITOL HILL: “I think what the president did is outrageous. The idea that we are going to give big businesses a break under Obamacare but we are going to punish small businesses and families? It is wrong and we will have another vote. Count on it.”

Gut Check Full Service: Minority Leader Nancy Pelosi’s office charges that Boehner is too focused on Obamacare… “This morning, Speaker Boehner told reporters 'to count on' the GOP voting again to repeal the Affordable Care Act … for the 38th time. It comes as no surprise that working on legislative solutions for the American people – or even just plain working – is not high on the list of priorities for Republican leaders. ... Over the next nine weeks, the House GOP is scheduled to be at work here in Washington just 15 days."

- Egypt: Still not a coup by WH standards -
PRESS SECRETARY JAY CARNEY AT THE WHITE HOUSE PRESS BRIEFING: “The President has been meeting regularly with his national security tam about the situation in Egypt. You are also correct as I said yesterday that we have not made a determination about what to call or label the events in Egypt that led to the change in government there and I tried to be very straight forward about the elephant in the room, if you will, by saying there's an elephant in the room here and that it is in our national interest – the best interest of the United States, and the best interest, in our view of our goal in assisting the Egyptian people, in their transition to democracy to take the time necessary to evaluate the situation before making such a determination.”

Based on multiple conversations, I'm upgrading Larry Summers to favorite to succeed Ben Bernanke as Fed Chairman. Yellen in #2 spot.

Hillary Clinton Gets The Nod From Anna Wintour For 2016 http://t.co/onZUyACZ8H via @Refinery29

The greatest thing since. Sliced bread is turning 85 this year. http://t.co/iAa2VdOkDa

When President Franklin Delano Roosevelt died in 1945, Democrats in Congress were looking for ways to honor the long-serving president. In 1946, Democratic Rep. Ralph H. Daughton of Virginia introduced legislation that would put Roosevelt's image on the dime.

The dime, in particular, was chosen because of Roosevelt's work founding that National Foundation for Infantile Paralysis – better known as the March of Dimes. The group, which raised money for polio research, an ailment that Roosevelt suffered from, used to ask people to donate by sending the foundation a dime.

In what was a quick turnaround, the Roosevelt dime was released to the public on what would have been the president's 64th birthday – January 30, 1946.