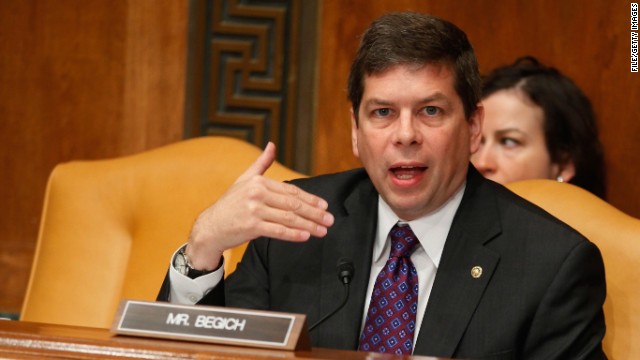 Washington (CNN) – Sen. Mark Begich, the Alaska Democrat who holds the seat Sarah Palin is considering seeking, argued Wednesday the high-profile Republican has lost touch with the values of her state.

Speaking to CNN the day after Palin said she had contemplated a run for Senate, Begich questioned whether the former governor and 2008 GOP vice presidential nominee still has enough of a connection to Alaska and its residents.

Also a problem, Begich said, was Palin's 2009 decision to step down as governor before her term was complete, a choice she said at the time was made due to the time and money spent on a litany of ethics complaints against her. She said then the complaints were without merit and took away from the job she wanted to do for Alaskans.

But Begich argued Wednesday the decision to depart the governorship midway cut against his state's values.

"One thing Alaskans pride themselves on is that no matter how tough it gets, not matter how tough the issues are, we stick with it through the end," Begich said. "And I think Alaskans know that she quit midway through her term. And that's the thing that sticks in people's minds."

"I think Alaskans understand that quitting midstream is not the Alaska way," he continued.

Begich, a former mayor of Anchorage, was first elected to the U.S. Senate in 2008. He defeated longtime GOP Sen. Ted Stevens, who died in a 2010 plane crash.

The 2014 race is labeled "lean Democratic" on the Cook Political Report, and the Rothenberg Political Report rates the race as toss up/tilt Democrat. Both are non-partisan political handicappers. Alaska Lt. Gov. Mead Treadwell and Joe Miller, a Republican who lost a U.S. Senate bid in Alaska in 2010, have both said they'll run against Begich next year.

But the Democrat pushed back on that allegation, pointing to the heat he's taking from some in his party for votes on gun control and energy production.

"I represent Alaska. And when Alaskans walk into the voting booth, they pick who they think they'll represent them best," he said.

But when it comes to potentially facing Palin next year, Begich said he's not discounting any rival.

"Something I've learned in my life, running for different offices, I ran for mayor and ran for Senate, I take everyone seriously," he said. "It doesn't matter who they are, where they come from, and how much money that have in the bank, their campaign. The unique thing about Alaska politics is that everyone is a contender."