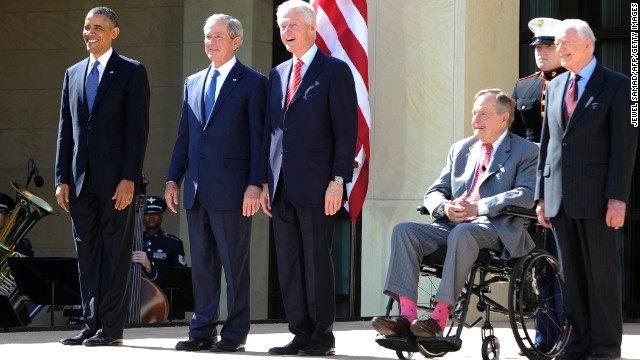 Bush 41 to be back at the White House

(CNN) - Former President George H.W. Bush will be back at the White House next week celebrating a milestone for a service initiative started in his administration.

President Barack Obama and First Lady Michelle Obama will host the event to celebrate the 5,000th Daily Point of Light Award, according to a White House official.

Calling volunteers in service to their communities "a thousand points of light" in his 1989 inaugural address, Bush went on to award the first Daily Point of Light awards to honor citizens who make a difference through their volunteer work.

The Points of Light Foundation is now the world's largest service organization coordinating volunteer projects. Bush serves as the non-partisan, non-profit foundation's honorary chairman and his son Neil Bush is the president of the organization.

"Monday’s event brings together two Presidents and families united in their commitment to growing volunteerism and service – an issue with a long history of strong bipartisan support," said the White House official.

"He is excited," Jim McGrath, spokesman for former President George H.W. Bush, told CNN. "It should be a special day for the service movement.”

Former First Lady Barbara Bush and other members of the Bush family will also attend the event.

The 89 year old former president has battled health problems. He had been hospitalized this past winter suffering complications related to bronchitis.