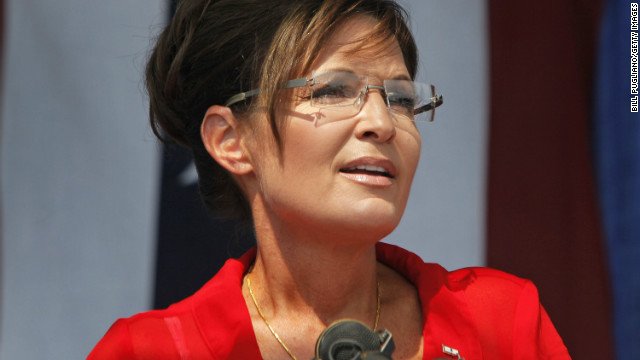 GEORGE W. BUSH IS BACK: “THE SYSTEM IS BROKEN”… Former President George W. Bush at a naturalization ceremony in Dallas: “The laws governing the immigration system aren't working. The system is broken. I don't intend to get involved in the politics or the specifics of policy, but I do hope there is a positive resolution to the debate.”

TRAIL TRIVIA
(Answer below)
What famous politician helped the prosecution in the 1925 Scopes trial?

MICHELLE (@mjaconiCNN)
What caught our eye today in politics

Sarah Palin has done it again. She has the Republican establishment scratching its head and asking ‘is she serious’?

Palin told Sean Hannity’s radio show Tuesday that she is indeed considering a run for Senate in Alaska. “I've considered it because people have requested me considering it, but I'm still waiting to see, you know, what the lineup will be and hoping that, there again - there will be some new blood, new energy - not just kind of picking from the same old politicians in the state that come from political families,” Palin said. “Sen. Mark Begich has got to be replaced.”

Mark Begich is the Democratic incumbent senator who is in a fight to hold onto the seat he won in 2008.

We reached out to Jennifer Duffy, who is the Senior Editor of the Cook Political Report, where she is in charge of ranking the U.S. Senate races.

Gut Check: What do you think of Sarah Palin considering a run for Senate in Alaska?

Duffy: I think it’s nuts. Let’s look at the polling; she was fairly unpopular among Alaska voters and she hasn’t spent that much time in Alaska lately.

Gut Check: She does have money and name ID.

Duffy: There are good candidates in this race already. This is one of Republican Party’s best opportunities to pick up a seat, but this is problematic for the GOP.

Gut Check: Isn’t it better for her then?

Duffy: Yes, because she tends to run outside the party. The worst thing she could do is run as an independent. The great irony for her is that she said there was a need for new blood and new faces, because she isn’t one.

Gut Check: You have the race ranked as a LEAN Democrat. (LINK) If Palin gets into this race for real, would it change your rating for the race?
http://cookpolitical.com/senate/charts/race-ratings

Duffy: There would be no change to the race rating unless she wins the nomination. There would be money - just not a lot from Alaska…Look, Democrats want this to happen; this is their dream for one of their most vulnerable incumbents; they will be her first contribution: ‘How can we help?’

Gut Check: Is it a bluff?

Duffy: With Sarah Palin you never know; this puts her back where she likes to be, in the media spotlight. It’s a 50-50 proposition.

Gut Check: Can you imagine a Senate with Sarah Palin?

Leading Drudge: Upstream: U.S. Taps Undersea Cables
Recent debate over U.S. government surveillance has focused on the information that American technology companies secretly provide to the National Security Agency. But that is only one of the ways the NSA eavesdrops on international communications. A classified NSA slide obtained by The Washington Post and published here for the first time lists “Two Types of Collection.” – Craig Timberg for The Washington Post

Leading HuffPo: Over The Line
In the courts of law and public opinion, congressional Republicans increasingly accuse President Barack Obama of exceeding his constitutional authority for the benefit of special interests, most recently by delaying a requirement for businesses to provide health care for their workers. – David Espo for the AP

Leading Politico: Immigration reform heads for slow death
Republicans walked away from their 2012 debacle hell-bent on fixing their problems with Hispanics. Now, they appear hell-bent on making them worse. – Mike Allen and Jim Vandehei

Leading The New York Times: Effects of Ruling on Same-Sex Marriage Start Rippling Out Through Government
The federal government began notifying workers of expanded benefit eligibility for same-sex couples, and the Senate is expected to take up a measure against discrimination. – Jeremy Peters

- State moving towards softer language on Egypt coup -
SPOKESPERSON JEN PSAKI AT THE STATE DEPARTMENT PRESS BRIEFING: “This is not a situation where you know, he was democratically elected, which of course he was, but the voices of the 22 million people, they spoke out about the way he was governed, governing, I'm sorry. So that is a unique circumstance, that's not for the United States to judge, what the voices of the Egyptian people are saying. What we're encouraging them to do now, is move towards a democratic, a sustainable democratic process.”

- Language watch: “A healthcare dictatorship” -
REPUBLICAN REP. SAM JOHNSON OF TEXAS AT A HEARING ON CAPITOL HILL: “I hate to see a dictatorship come into this country, but it sure looks like that's what's happening with healthcare.”

- Biden talks tough at China forum -
VICE PRESIDENT JOE BIDEN AT A UNITED STATES-CHINA FORUM: “We both will benefit from an open, secure, reliable internet. Outright cyber enabling theft that U.S. companies are experiencing now must be viewed as out-of-bounds and needs to stop.”

Texas House has approved a measure that would place broad new restrictions on abortions in the state. #CNN #BREAKING #HB2

My number of the day is 54 - US House districts where Asians are 10%+ of population http://t.co/GSyERXkyOM Ds hold 44

Fed Minutes: A "few participants" also thought the Fed should have started slowing or stopped QE3 at the June meeting

When William Jennings Bryan heard of Tennessee's Scopes trial, a case that pinned believers in creationism and believers in evolution against each other, the three-time Democratic presidential candidate and outspoken evangelical helped argue in favor of creationism.

John Thomas Scopes, a young Tennessee teacher, was accused of teaching his class about evolution - an action that broke Tennessee's Butler Act, which made teaching evolution in any public school illegal. He – along with the help of the ACLU – challenged the law and the Scopes trial began on this day in 1925.

Bryan had long been a supporter of the Butler Act. After it was signed into law, he praised the bill, stating "the Christian parents of the state owe you a debt of gratitude for saving their children from the poisonous influence of an unproven hypothesis."

The trial drew hordes of media attention to the small town of Dayton, Tennessee.

After eight days of testimony, a jury found Scopes guilty and forced him to pay a $100 fine. Although the defense appealed the case to the Tennessee Supreme Court, the high court upheld the statute that forbade the teaching of evolution.

Decades later, though, in the case Epperson v. Arkansas, the United States Supreme Court ruled that laws like the Butler Act violated the Establishment Clause, making them unconstitutional.

Congrats to Edith Chapin (@EdithChapin) for correctly answering Gut Check trivia. We miss seeing Edith at CNN so are happy to reunite with her in the winner’s circle.