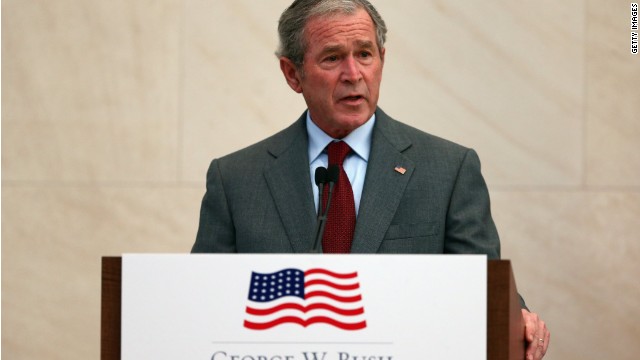 Dallas (CNN) – Former President George W. Bush on Wednesday welcomed newly sworn-in citizens at a naturalization ceremony, offering each individual a certificate and handshake before giving his own address on immigration reform.

Among the newly naturalized at the George W. Bush Presidential Center in Dallas, Danny Diaz admitted he illegally crossed the U.S.- Mexico border in 1994 in a long journey from his native Guatemala.

It took nearly a decade for Diaz to receive legal residency status and finally citizenship.

"It's a long wait. It's a hard wait too. But if you work for it and you prove you know how to behave in this country everything comes through," Diaz said.

Asked for his thoughts on immigration reform, Diaz called it "a good thing."

"There's a lot of good people out there who don't have papers."

Lance Corporal Antonio Miguel Villaceran, a U.S. Marine Corps Reserve, was unaware Bush would be in attendance. "I love what George Bush is doing right now."

Akshaya Bandaru, who immigrated to the U.S. from India, received a private meeting with the former president along with the other newcomers and their families.

Bandaru said the former president was funny.
"I told him I was going into medical school and he said 'I hope it's geriatrics,'" Bandaru said.