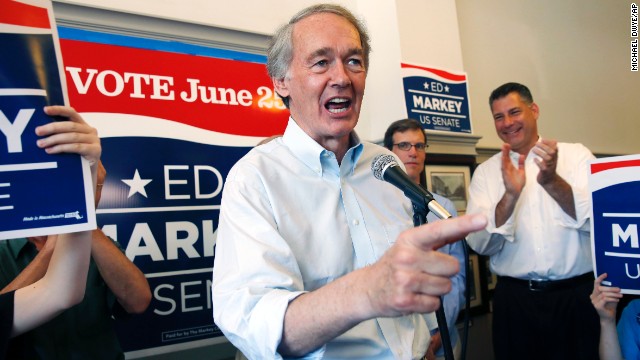 Washington (CNN) - Ed Markey was sworn in Tuesday as the newest member of the U.S. Senate.

But Markey, 67, is anything but a rookie on Capitol Hill. The Democrat from Massachusetts was in his 20th term in the House of Representatives before winning election last month to the Senate.

Vice President Joe Biden administered the oath of office to Markey Tuesday morning in the Senate chamber. As the vice president was introducing Markey for the ceremony, he was briefly interrupted by Senate Majority Leader Harry Reid, who asked that any senators who wanted to praise Markey to please do it later in the day, as the chamber needed to move onto a bitter partisan fight over restricting filibusters.

Markey defeated Republican businessman Gabriel Gomez 55%-45% in a June 25 special election to serve the remaining year and a half of the term of longtime Democratic Sen. John Kerry, who stepped down earlier this year after being confirmed as U.S. secretary of state.

If he wants to stay in the Senate past next year, Markey will need to run for re-election in November 2014, when a full six year term will be at stake.

"Been an honor to serve MA as Senator," Cowan tweeted on Monday.

Markey's swearing in to the Senate formally kicks off the race to fill his now-vacant House seat, which he held for 37 years. On Monday, Patrick set the dates for the special election, with the primaries on October 15 and the general election on December 10.

The seat is predicted by most political handicappers to remain safely in Democratic hands. The district covers many of the inner western and northern suburbs of Boston.