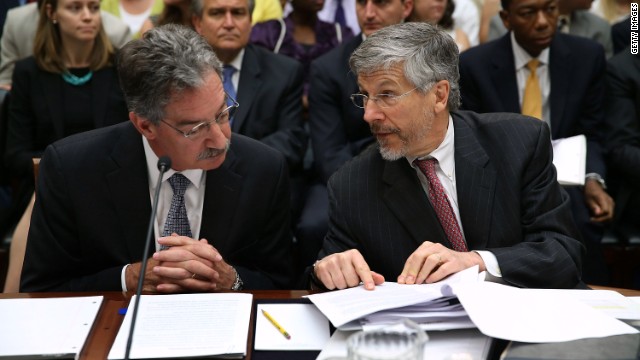 Lawmakers from both parties expressed frustration with how the law involving the collection of phone numbers and other “metadata” had been applied over the years via the authority of a secret national security court.

One senior member raised the possibility of Congress shelving the surveillance initiative altogether if changes aren’t made.

“This program has gone off the tracks legally,” said Rep. Zoe Lofgren, a California Democrat.

“I don’t want to scream at you or yell at you but you know we have got a lot of people across the country that would like to do that,” said Rep. Randy Forbes, a Virginia Republican.

Justice Department and National Security Agency officials defended the program that can track communications to and from overseas as limited and carried out under careful legal review and rigorous procedures to prevent abuse.

Congress approved the program as part of sweeping national security legislation that took shape as a response to the al Qaeda attacks on the United States and updated in 2006.

But many lawmakers since Snowden’s leaks to media outlets in June about phone and e-mail surveillance have struggled to understand just how, when and to what degree data is collected under the law.

Wednesday’s Judiciary Committee exchanges were sharp at times with lawmakers not always satisfied with answers they got.

James Sensenbrenner, a Wisconsin Republican and author of the law that included the surveillance programs, the Patriot Act, was troubled by the sweeping way in which phone surveillance can be applied - despite national security court review - and warned that officials needed to change the way they do business in this case.

“Unless you realize you got a problem, that is not going to be renewed,” Sensenbrenner said of the phone tracking program that comes up for renewal in Congress in 2015.

Forbes asked whether there had been instances of abuse by those administering the surveillance effort.

“We know of no one … who has ever intentionally or in any kind of wrongful way abused this. There may have been technical problems that have happened here and there. But there has been nobody who has abused this in a way that would be worthy of or cause discipline,” Cole said.

“When you guys tell me nobody’s abused it, I thought Mr. Snowden abused it pretty badly,” Forbes responded.

Deputy NSA Director John Inglis said there was no evidence that Snowden abused the program as it was defined today, noting that he took “ruthless advantage” of his access to information.

“He may have abused his trust in disclosing classified details of that program,” Inglis said before he was cut off by Forbes.

“But, but in all due respect, and I said I wasn’t going to yell at you and I’m going to try not to – but that is exactly what the American people are really worried about – that somebody is getting their data and using it to disclose it in some other situation and for the life of me I don’t understand how you guys parse that issue that is there,” Forbes said.

Snowden has been stranded for weeks at the Moscow airport. He has sought temporary asylum in Russia and hopes eventually to go to a Latin America. The United States has revoked his passport and charged him with espionage.