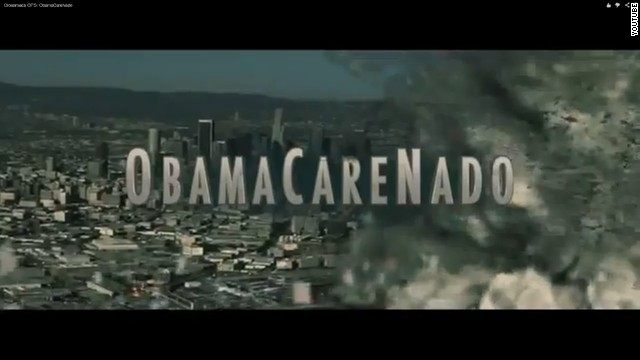 Crossroads GPS takes a toothy bite out of 'ObamaCareNado'

Karl Rove-backed Crossroads GPS has a new online attack video criticizing Obamacare in a howling, chomping mass of fury and destruction that shall forever terrify the shark/tornado/health care-phobics of the world.

"Just when you thought it was safe to go to the doctor," the schlock-stick narrator tells viewers, "a rising tide of health care costs."

Tornadoes rip through scenery and people in the 47-second 'trailer,' bearing the faces of prime Crossroads targets like House Minority Leader Nancy Pelosi, Sen. Majority Leader Harry Reid, and of course the president.

"Nobody is safe from its wrath," the video says of "ObamaCareNado." "Leaving a path of destruction through our economy."

Crossroads GPS has delighted at going after Democrats on a variety of issues, including immigration reform and student loans. One of the largest conservative political groups, the organization spent $176 million in the 2012 federal elections, according to OpenSecrets.org.

Republicans in the House of Representatives have been just as eager to go after Obamacare in recent days, passing a pair of bills Wednesday night that would postpone the individual and business mandates of the Affordable Care Act. Neither bill is expected to go anywhere in the Democratic-controlled Senate.

The "ObamaCareNado" video came as Obama delivered a major speech Thursday morning touting the success of the signature legislation of his first term.

"Affordable health care is not some privilege just for the few," Obama said. "It's a basic right that everybody should be able to enjoy so we're going to keep fighting to secure that right to make sure that every American gets the care that they need when they need it at a price they can afford."

On Wednesday, a study was released predicting a drop in price of 50% for New York residents when the health care law takes effect next year.