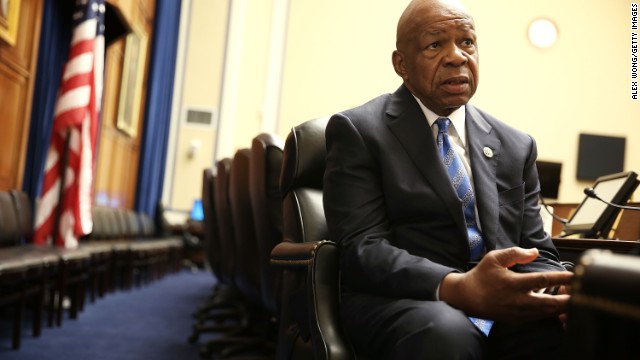 Yet when he is walking down the street in Washington, D.C., at night and white women walk toward him, he says "I cross the street" to avoid making them uncomfortable.

Cummings says he rarely speaks about race or what life is like as a black man, but says President Barack Obama's heartfelt remarks Friday afternoon made him more comfortable to do so.

"I think it's important that he speak out and he brings a very unique perspective, because is the president and he has been extremely fortunate compared to most African-Americans, and yet still he can speak to the prejudices that most of us still face," Cummings told CNN in a telephone interview.

Cummings lives in what calls the "inner city" of Baltimore, Maryland.

For emphasis, he says "when I say inner, I mean inner."

The 10 term congressman says he loves to go shopping with his wife, because he likes to watch her try on dresses. But he won't do it outside his district where people know him because "I don't like the idea of people following me around.”

"People usually have the security guard following me, or questions with the overabundant, 'can I help you?' They think you're going to do something wrong. We've seen it over and over again since childhood," said Cummings.

He joked that it's a bit better recently since, as the ranking member of the GOP-led House Oversight Committee, which is investigating IRS misconduct, Benghazi and more, he is on T.V. often and is recognized outside his district.

Still, he too talked about "feeling the tension" when he is in the elevator with a white woman.

Some African-American leaders and activists have expressed frustration with Obama for not using his position to stir a national discussion about race. Cummings was not one of those people.

"It's not that simple. People go crazy," said Cummings.

"I see the way this country reacts to the littlest thing he says about race," he said.

Plus, Cummings believes that before Obama was elected to his second and final term, it would have been "counterproductive to talk about these things because everything was in the prism of politics."

"Now that he has the freedom to not worry about re-election, I think he has a better opportunity," said Cummings.

A day earlier, Cummings' race played out in an awkward moment during a tension-filled IRS hearing.

When admonishing Cummings, Rep. Darrell Issa, the Republican Oversight Committee chairman, referred to Cummings as "a little boy whose hand’s caught in the cookie jar."

Later, Issa apologized to his African-American colleague for using the term “boy.”

"That is something I grew up with, it is intended to be about a small child, and in no way the use of boy or little boy to be anything else," Issa said.