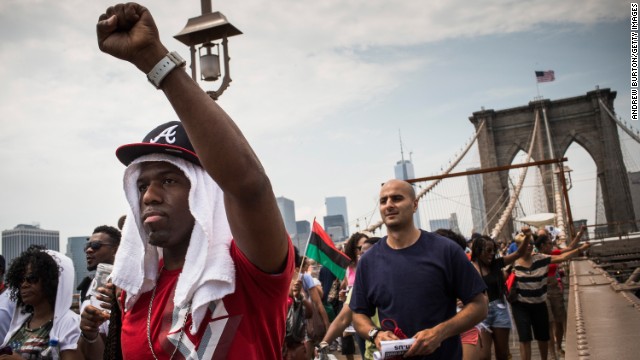 (CNN) – The not guilty verdict in the George Zimmerman trial has Americans divided, with equal numbers saying they approve or disapprove of the verdict, according to a poll released Monday.

The Washington Post/ABC News survey, which showed 41% of Americans approving and 41% disapproving of the jury's ruling, also showed sharp division among Americans in their views of the verdict. For example, 86% of African-Americans disapproved of the "not guilty" finding, while 51% of whites approved.

That closely aligned with a Pew Research Center survey released Monday, which showed 86% of African-Americans disagreeing with the verdict.

In the Washington Post/ABC poll, women - 48% of whom disapproved of the verdict - were more likely than men to hold that sentiment. And younger people also disapproved at higher levels: 50% of those aged 18-39 said they disapproved, while 30% of people over 65 felt the same way.

Sixty-two percent of Democrats disapproved of Zimmerman's acquittal, while 65% of Republicans approved.

Zimmerman, a neighborhood watch captain, shot unarmed black teenager Trayvon Martin in February 2012 in what he said was an act of self-defense. His trial drew widespread attention from the nation, much of it focused on the issue of race.

The Pew poll found 52% of respondents saying race was getting more attention in the Zimmerman case than it deserved, while 36% said it was raising important racial issues that need to be discussed.

Asked whether federal civil rights charges should be brought against Zimmerman, 46% said they should not, while 39% thought he should be charged.

The U.S. Justice Department has an open investigation in Zimmerman's case, though Attorney General Eric Holder has spoken in the past about the difficulty in bringing hate crime charges in the case.

The Washington Post/ABC News poll was conducted by telephone July 18-21 with 1,002 adults, and the sampling error was plus or minus 3.5 percentage points.

Pew’s survey was from 1,480 adults and was taken by telephone July 17-21. The sampling error was plus or minus 3 percentage points.