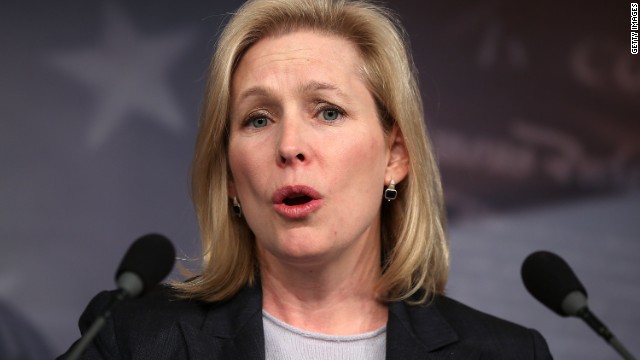 "I believe Scott Stringer is clearly the best choice to serve New Yorkers as the next comptroller of the City of New York," Gillibrand said in a statement, released by Stringer's team. "Scott will fight hard for middle class families and has the temperament and judgment to be extraordinarily successful."

Stringer was considered the frontrunner in the race until Spitzer, New York's former governor, made his surprising entry into the race earlier this month. Since then, recent polls have indicated Spitzer is now ahead in the race for the Democratic nomination.

It's well documented that Gillibrand and Spitzer haven't been the best of friends. When Gillibrand was in the U.S. House of Representatives, she was among the first Democrats to call for the former governor to resign over his 2008 prostitution scandal.

After Spitzer stepped down, his successor, then-Gov. David Paterson, appointed Gillibrand in January 2009 to the Senate seat vacated by Hillary Clinton, who was tapped to be President Obama's secretary of state.

A year later, Spitzer offered sharp criticism of Gillibrand's job in the Senate, saying in a radio interview he would not have appointed her had he been in office because her views were "too malleable."

A spokesman for Gillibrand reportedly responded by saying, "Because of (Spitzer's) own actions, it wasn't his call to make."

For his part, Stringer has also had some tension with Gillibrand. He considered a primary challenge against the junior senator in 2009, but ultimately decided against it.

On Monday, however, he said he is "thrilled" to have Gillibrand's support. He pointed to the popular senator's work in supporting "transparency in government" and combating sexual assault in the military.

"She has made New York proud with her leadership in the United States Senate, and I could not be more honored to accept her endorsement," Stringer added.

Miram Hess, a senior strategist for Spitzer's campaign, said in response to Gillibrand's endorsement Monday, "While we have a deep respect for the organizations and individuals involved, we know that endorsements don't vote, voters do. No one has better record on reproductive and women's rights than Eliot Spitzer and that's why we're confident that we will continue to enjoy the support of New York voters come election day."

Gillibrand won a special election in 2010 to finish the rest of Clinton's term, and won re-election to the seat in 2012 with 72% of the vote.

The Democratic primary will take place on September 10.