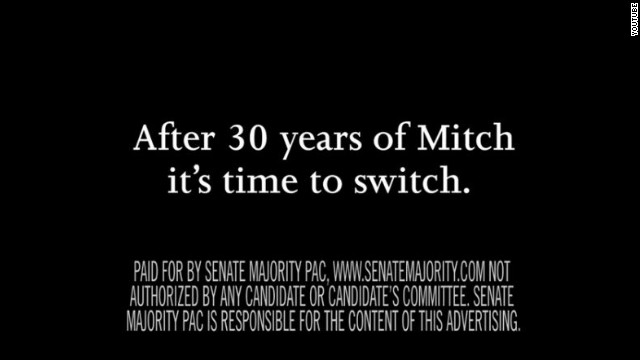 (CNN) - Senate Majority PAC, an independent group that works to keep the Senate in Democrats' hands, launched another attack ad Tuesday against Senate Minority Leader Mitch McConnell, highlighting the Kentucky Republican as a "guardian of gridlock."

The ad, also sponsored by Patriot Majority USA, is part of a campaign the two groups kicked off last month called "30 Years Is Too Long," as they seek to oust the senator in next year's election.

Using footage of the five-term senator, as well as text from media reports, the 30-second spot argues the senator has lost respect among those in his own party during his tenure on Capitol Hill.

"After 30 years of Mitch, it's time to switch," text on the screen reads.

The ad buy, which will run statewide, costs close to $270,000, according to a Senate Majority PAC official.

While McConnell gets hit by the left, he's also getting hit by the right this week. Matt Bevin, a Louisville businessman, is expected to launch a primary challenge against the longtime senator on Wednesday.

Senate Majority Leader Harry Reid talked about the Kentucky race Monday night at a Democratic gathering, cheering on the fact that McConnell will likely have a primary opponent, in addition to his Democratic opponent, Kentucky secretary of state Alison Lundergan Grimes.

"(McConnell) tried to make love to the tea party and they didn't like it," Reid said.

The senator's team pushed back at the ads Tuesday.

"Barack Obama's allies know as much about Republicans or Kentuckians as they do about coal jobs and health care," McConnell re-election campaign manager Jesse Benton said. "These ads show that they are desperately trying to throw a life-jacket on Alison Lundergan Grimes' fledgeling campaign in an attempt to let a Nevadan who says 'coal makes us sick,' not a proud Kentuckian, set the agenda for the Senate and continue waging the war on coal and implementation of Obamacare."

McConnell has gone up with his own ads earlier this year.