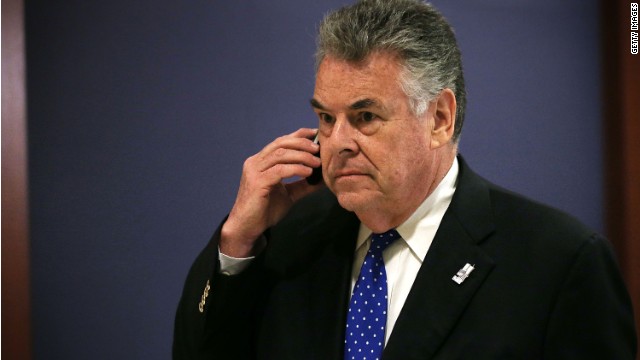 Now, the longtime Republican congressman from New York is going on the road to apparently prove it.

King announced in an email to supporters Tuesday that he'll travel to New Hampshire in the coming months for two GOP events. The state holds the nation's first primary in presidential election years and its political visitors are closely watched in the run-up to official campaign launches.

The former House Homeland Security Committee chairman will attend an event held by the Carroll County GOP to thank first responders who helped New Yorkers in the aftermath of Superstorm Sandy. On September 15, he'll attend an event put on by the Strafford County GOP, according to the group's website.

King said last week he was being urged to run for president by colleagues out of concern for the party's direction on matters of national security.

His younger Republican colleagues and speculated 2016 contenders, Sens. Rand Paul and Ted Cruz, hold national security views that are potentially "damaging" to the GOP, he said in a separate email to supporters.

The 69-year-old King said Paul and Cruz, who tend to have more non-interventionist viewpoints on foreign policy, are looking at national security "from a very backwards point of view."

He referred to the debate over the administration's policies on drone strikes against terrorist suspects who are also American citizens. Cruz played a large role in congressional hearings over the issue, while Paul made it the subject of his nearly 13 hour filibuster earlier this year.

"I don't want over the next year, 18 months, two years, for the Republican foreign policy debate to be dominated by people like Sen. Rand Paul," King said.

In his email Tuesday, King included a supportive quote from Sen. John McCain.

"I'm a great fan and friend of Peter King. He's a colorful guy and did a great job as chairman of the Homeland Security Committee," McCain wrote. "And I understand his frustrations about some of the things, particularly, that have happened over here in the Senate."

King briefly toyed with a presidential run in 2011 and also flirted with a Senate run against incumbent Sen. Kirsten Gillibrand in 2010.

While his email last week about a potential 2016 run included a link for supporters to donate to this congressional campaign, his email on Tuesday did not include a fundraising link.