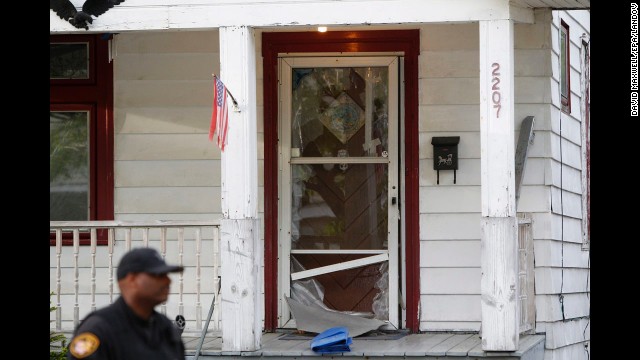 A police officer stands in front of the broken front door of the house where kidnapped women escaped in Cleveland, Ohio, on May 7.
July 25th, 2013
07:20 PM ET

(CNN) - After a judge denied Cleveland kidnapping suspect Ariel Castro’s request to see the 6-year-old daughter authorities say he fathered with one of his victims, a bill introduced on Capitol Hill earlier this week would strip convicted rapists of their parental privileges and custody nationwide.

“Without such a law, woman can endure years of being tormented by an abuser,” said Rep. Debbie Wasserman Schultz, D-Florida, at a press conference on Thursday.

One such victim was on hand. Shauna Prewitt was a college senior when she was raped and decided to keep the baby. Now a custody rights attorney, Prewitt said Thursday she was “tethered” to her rapist by Illinois custody rights.

“Women who face the issue that I faced are dealing with custody battles that are behind closed doors,” Prewitt said. “This is absolutely horrific and we shouldn’t be bargaining with rapists."

Ohio, where Castro is accused of imprisoning his victims, currently has no laws that would take away Castro’s parental rights.