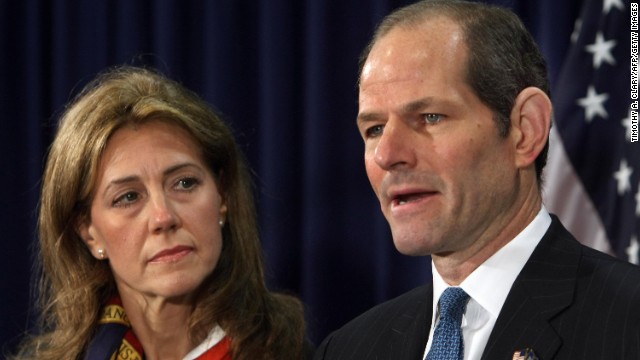 (CNN) – She famously stood by Eliot Spitzer in the aftermath of his 2008 prostitution scandal, but Silda Wall Spitzer hasn't been hitting the trail in her husband's bid for a political comeback.

Speaking at a campaign stop Thursday, the candidate for the Democratic city comptroller nomination suggested that wouldn't change in the lead up to September's primary.

"I think it's fair to say that I'm running for office, no other member of my family is running for office, and I think the public's going to judge me, not who else is with me or not with me," Spitzer told a gaggle of reporters, including representatives from CNN affiliate NY1 and the New York Post.

"You know, she's got a career, there are other things that I think the public appreciates I'm out here fighting every day for," Spitzer continued.

When asked Friday whether Silda Wall Spitzer would join her husband on the campaign trail, his spokeswoman Lisa Linden told CNN, "Silda is supportive of Eliot's campaign."

Linden wouldn't specify whether Silda Wall Spitzer - a Harvard Law School graduate who previously worked as a corporate attorney - would campaign for her husband.

Earlier this month, Spitzer told CNN's Jake Tapper he did expect his family to stump for him in the month leading up to the September 10 primary vote.

Silda Wall Spitzer's absence from her husband's campaign stands in sharp contrast to Huma Abedin, the wife of New York City mayoral candidate Anthony Weiner, who was active in his campaign even before this week's revelations of his online sexual impropriety.

As the Weiner scandal unfolded Tuesday, Abedin took the remarkable step of speaking to the press for the first time about the allegations, saying she had forgiven her husband and was supporting his candidacy.

CNN's Alina Cho and Kevin Liptak contributed to this report.