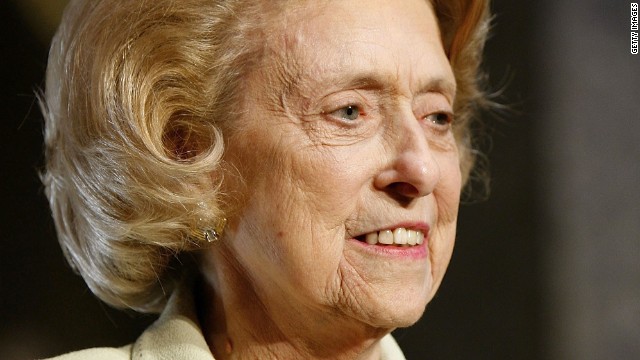 Boggs died Saturday at the age of 97, according to ABC News, where Boggs' daughter Cokie Roberts is a political contributor. A cause of death was not specified.

Lindy Boggs was a teacher when she married Thomas Hale Boggs, Sr., a lawyer and former classmate at Tulane University who was first elected to Congress in 1940. She served as his campaign manager and staffer through his 14 years in the House.

Among her most noted accomplishments was convincing male colleagues to include "sex and marital status" as banned categories for discrimination in a key 1974 equal opportunity law. She was a freshman legislator at the time.

Hale Boggs was House majority leader in October 1972 when his plane disappeared in Alaska. He was re-elected that fall and she went on to win a special election for the seat.

President Barack Obama and other political figures recognized her work on both civil rights and women's issues.

"Her legacy as a champion of women's and civil rights over her nine terms in office as the first woman elected to the United States Congress from Louisiana will continue to inspire generations to come," he said.

Former President Bill Clinton said in a statement, "The country has lost a champion for civil rights and a trailblazer for women, and our thoughts and prayers are with her family and her legions of friends and supporters."

House Minority Leader Nancy Pelosi, D-California, served alongside Boggs and said Saturday, "I hope it is a comfort to the Boggs family that so many people in the world mourn their loss and appreciate the life of Lindy Boggs."

Sen. Barbara Mikulski, D-Maryland, remembered Boggs as "an advocate for equality and social justice for all, especially minorities and women."

"Long after she left Congress I would still get calls from her. She would say, 'Barbara darlin', I have a little request that can go a long way,'" Mikulski said. "She fought for people's day-to-day needs from day care centers to literacy programs to shelters for battered women. Even though she left the House, she never left the people of New Orleans."

Politics was in her blood and she passed it to her children. Ancestors served in Congress in the 1700s and 1800s.

Her son, Thomas Hale Boggs, Jr., is a well-known Washington lawyer and lobbyist; her late daughter Barbara Boggs Sigmund was mayor of Princeton, New Jersey; and Roberts is the high-profile political journalist.

- CNN's Kevin Bohn and Sarah Baker contributed to this report