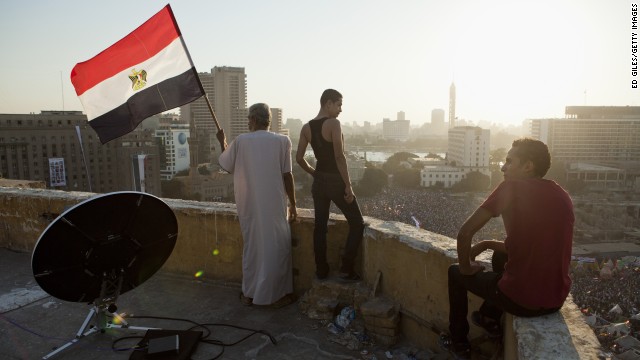 (CNN) - After dozens died in weekend protests in Egypt over the ouster of President Mohamed Morsy, Sen. Dianne Feinstein - the top Democrat on the Senate Intelligence Committee - said she’s worried for the first time about the future of the country.

“I think this is a real point of definition of what kind of Egypt is going to come out of this. For the first time, I am very concerned,” Feinstein said on CNN’s “State of the Union.”

“I’m surprised that the military would urge people to go to the streets,” the California Democrat told chief political correspondent Candy Crowley. “They had to have known if they do that the other side would respond. And it became a kind of catalyst for violence.”

Seventy-two people were killed Saturday in Cairo, though opposing sides have each pinned the blame for the violence in different places - the Islamist group Muslim Brotherhood say police fired ammunition on protesters Friday and Saturday, while the prosecutor general's office said protesters initiated the violence.

The clashes came nearly a month after the military forced Morsy from office. In the next several weeks, Feinstein said it would be essential for interim President Adly Mansour and interim Vice President Mohamed ElBaradei to take charge of the military to prove democracy can exist in Egypt.

“I think it's very important for this new president and vice president to exert their authority now,” she said. “It will show whether a democracy, in terms of control of the military, can effectively govern that country. So the next few months, I think, are going to be real eye openers for the world.”