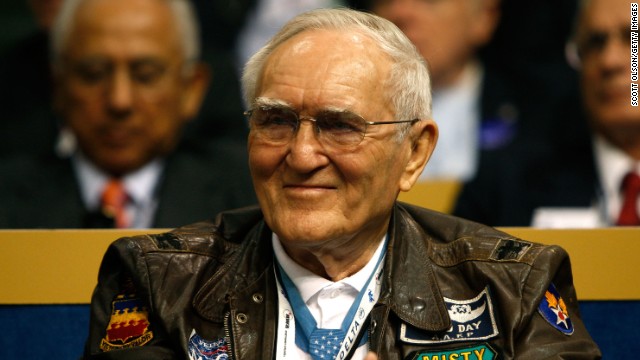 (CNN) - Retired Col. George "Bud" Day was the "bravest man I ever knew," Sen. John McCain said Sunday of the war hero with whom he shared a cell as a prisoner in North Vietnam.

Day, a highly decorated serviceman who was awarded the Medal of Honor in 1976, died Saturday at age 88 in Florida, according to CNN affiliate WJHG-TV in Panama City.

"I owe my life to Bud, and much of what I know about character and patriotism," McCain, an Arizona Republican, said in a statement. "His fierce resistance and resolute leadership set the example for us in prison of how to return home with honor."

Forced to eject from his F-100 military aircraft above North Vietnam in 1967, Day - whose arm was broken in three places - was captured by North Vietnamese forces and interrogated.

He managed to escape 10 days later, trekking through the jungle toward South Vietnam. But after wandering for days and unsuccessfully attempting to signal U.S. aircraft, he was eventually recaptured by enemy forces.

The citation for his Medal of Honor notes Day offered "maximum resistance" to enemy interrogators during his 5 1/2 years in captivity, much of it inside the notorious "Hanoi Hilton."

"His personal bravery in the face of deadly enemy pressure was significant in saving the lives of fellow aviators who were still flying against the enemy," the citation read.

The injuries Day sustained to his arms never fully recovered. McCain, whose aircraft was shot down over Hanoi two months after Day's, suffered similar injuries during his time as a prisoner of war.

Day was a supporter and surrogate for McCain's 2000 and 2008 presidential bids, and in 2004 he appeared in television ads produced by Swift Boat Veterans for Truth, the group created to attack 2004 Democratic nominee John Kerry's military service record.

Born in Sioux City, Iowa, in 1925, Day was a Marine in the North Pacific during World War II and later was an Army Reservist before joining the Air Force in 1951.