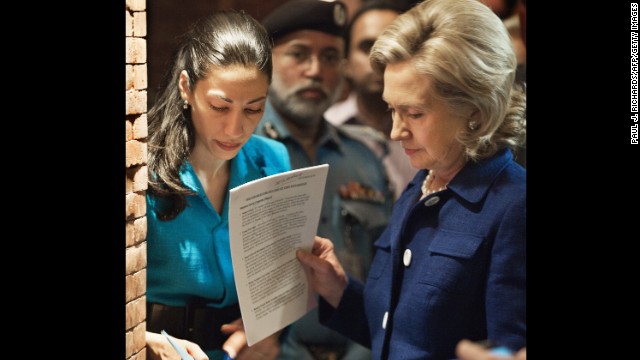 The two were seen sitting outside at Meiwah Restaurant, a bustling area located between the neighborhoods known as Dupont Circle and Foggy Bottom.

Meiwah is a favorite spot of Reines' and is considered a place to see and be seen.

Their public outing comes after a source pushed back against a report that Bill and Hillary Clinton have political concerns about their association with New York City mayoral candidate Anthony Weiner, Abedin's husband.

Weiner, a Democrat, is resisting calls to drop his bid for mayor despite admitting to sending more lewd messages and photos after his 2011 resignation from Congress.

The source disputed a story in the New York Post that said the Clintons are "livid" at comparisons made between Weiner and the former president. Instead the source said the Clintons' anger stemmed from their personal relationship with Abedin and not from any political concerns about their association with Weiner.

Abedin is a longtime friend and top adviser to Hillary Clinton.

The Clintons have declined to publicly weigh in on the mayoral race. Weiner shrugged off questions from reporters Monday night about the power couple.

"I'm not terribly interested in what people who are not voters in the city of New York have to say," Weiner said after a campaign stop in the Bronx.

Abedin began working for Hillary Clinton as a White House intern in 1996, eventually becoming the former first lady's traveling chief of staff - or "body man" - during her 2008 presidential campaign.

During Clinton's tenure as secretary of state, Abedin served as a top aide and remains an informal Clinton adviser.

Former President Clinton officiated at Abedin's 2010 wedding to Weiner. At the time, former Secretary of State Clinton said: "I have one daughter. But if I had a second daughter, it would (be) Huma."