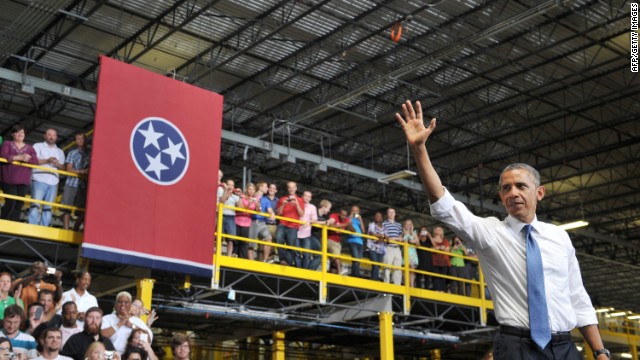 In the last week he spoke in two states that were clearly in his column last year: Illinois and Florida.
He, however, lost Tennessee in 2012 by almost two to one in the popular vote.

During his event at Amazon distribution center in Chattanooga, he even acknowledged it:

"I know that the politics for Obama aren't always great in Tennessee."

The state is represented by two conservative GOP senators – Lamar Alexander and Bob Corker, and Chattanooga is part of the 3rd Congressional District which has long sent a Republican to the House of Representatives. Currently Rep. Chuck Fleischmann represents the district.

All three were invited to the president's speech at an Amazon center that processes and fulfills online customer orders, but they all declined citing other commitments. There were several elected Democrats, including Rep. Jim Cooper, on hand, and some locally elected Republicans did attend.

"I hated for the president to come to my hometown and not accompany him, especially because it would have provided an opportunity for us to talk more about our country's fiscal challenges," Corker, a former mayor of Chattanooga, said in a statement, but he said he had work to do in Washington.

During his speech the president proposed to Republicans a deal: he would accept a corporate tax decrease if they would pass some of his spending proposals, such as infrastructure improvements, with some of the accompanying savings from the tax cut.

"If folks in Washington want a 'grand bargain,' how about a grand bargain for middle class jobs?" the president asked.

He is using speeches, such as Tuesday's, to try show he is emphasizing the middle class and ways to strengthen it – and that the Republicans are standing in the way.

Republican leaders immediately shot down the president's proposals as just recycled ideas. "It is just a further left version of a widely panned plan he already proposed two years ago – this time with extra goodies for tax and spend liberals," Sen. Mitch McConnell, R-Kentucky, said.

But the White House could tout one bit of good news – Amazon just one day ago announced it would add 5,000 full-time jobs, including dozens in Chattanooga, to its distribution centers around the country.

The Amazon plant in Chattanooga employs 1,800 full-time employees and 700 part-time ones. Currently it employs about 20,000 full-time workers at its fulfillment centers.

As the president used the event to tout ways to help the middle class, the White House was asked about whether Amazon's jobs fit that category. Amazon says the jobs in its fulfillment centers pay 30% percent more than traditional retail ones and they carry bonuses and tuition programs. While salaries vary by location, a full-time worker starting out at a distribution center would start out making approximately $11-$17 an hour.

Another irony for the president's visit: while he touted in the speech manufacturing and how the number of jobs in manufacturing has gone up, Chattanooga has seen a revitalization as it is no longer emphasizing manufacturing.

Much of the job growth in the city is now in the service sector thanks to hospitals, insurance and other businesses such as Amazon.

"Diversity has really grown in the last 20-30 years," Charles Wood, vice president of the Chattanooga Chamber of Commerce, told CNN.

While in the 1970's and 80's manufacturing dominated the city, the city eventually lost thousands of jobs because of economic shifts.
City leaders decided to diversify and now see manufacturing and service both play key roles.

"They play well off of each other," said Wood.