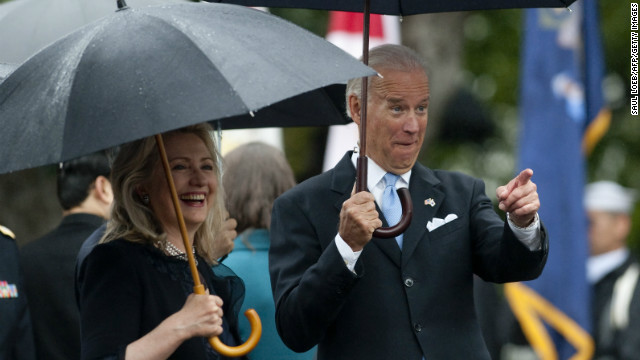 But this wasn't just any morning meeting. The breakfast between former Secretary of State Hillary Clinton and Vice President Joe Biden, held at the vice president's residence, could be a coming attraction for the battle for the 2016 Democratic nomination.

According to the vice president's office, the two dined on scrambled eggs with roasted tomatoes and avocado, turkey bacon, fresh cut fruit, and multigrain toast. But the big question is whether the next race for the White House was also on the menu.

Both Clinton and Biden are considered possible contenders for the next Democratic presidential nomination. And if Clinton runs, she'd be the early overwhelming frontrunner.

Biden and Clinton have a long history of working with each other, from their years together in the U.S. Senate to their dealings the past four years in President Barack Obama's first term.

"Vice President Biden and Secretary Clinton have enjoyed a long friendship which flourished when she joined the Senate and continues to this day," Larry Rasky, a longtime senior political adviser to Biden, told CNN.

An official with the vice president's office says the breakfast had been long planned.

For Clinton, Tuesday's meal with Biden follows a lunch Monday at the White House with her old boss.

So what was on the agenda at that get-together between Clinton and Obama?

Deputy Press Secretary Josh Earnest said it was "largely friendship" that was on the agenda between Obama and Clinton, who were fierce rivals in a marathon and historic race for the 2008 Democratic nomination.

Earnest said the president invited Clinton to the lunch, which consisted of grilled chicken, pasta jambalaya and salad.