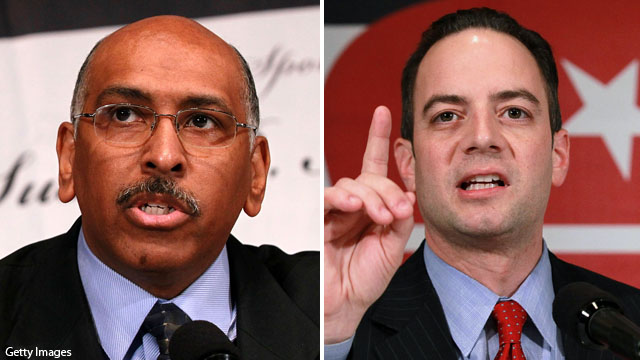 After Republican National Committee chairman Reince Priebus announced a "50 state strategy" last week that will deploy paid field staffers in every state in a push to rebuild the GOP's stale voter contact operation, Steele, the party's former chairman, said he "had to laugh."

"I guess what's old is new for these guys," Steele said in a phone call to CNN. "They are finally realizing that gee, Michael Steele got it right. But no one has the balls to admit it."

Steele, who became RNC chairman in 2009 but was voted out of the post two years later, said the idea to build a nationwide get-out-the-vote infrastructure for Republicans was actually his - though he looked to Howard Dean's old 50-state model at the Democratic National Committee for inspiration.

"When I first came in, I talked about how we were going to engage the country as a whole," Steele said. "Remember, I got criticized for going to the far off places, like Puerto Rico and America Samoa. The last time I checked, they were part of the 50 state strategy. Which is why I went out to the places that were otherwise ignored by the national party. I was just kind of laughing as I was reading this story, and talking about this as if this is something new. Well, the structure for it was in place. The underpinnings of the strategy were in place, so this is nothing new."

Steele said he also invested heavily in the committee's coalitions department in an effort to reach out to minority voters in places long forgotten by Republican leaders in Washington.

Staffers at the RNC say they're perplexed by Steele's analysis.

"Sure, and Al Gore invented the Internet," party spokeswoman Kirsten Kukowski said when asked about his claims.

Steele's critics, and there are many in Washington, like to point out that the former chairman left the committee in 2011 with more than $20 million in debt and made few long-term investments in party-building efforts beyond touring the country and doling out special favors to his supporters on the committee.

Republicans on Capitol Hill also scoff when Steele takes credit for flipping the House from blue to red in 2010, a wave election that probably would have seen huge Republican gains with or without organizational assistance from the RNC and other party organizations.

If Steele did come up with a 50 state strategy, his vision differed markedly from the one currently being implemented by party officials.

The RNC has hired paid, full-time operatives to work alongside state parties and candidates in 12 states so far, and plans to fund hundreds of staffers and offices in every state, including Democratic-leaning ones, by the time the project is finished.

Their goal is to engage early with voters, with an emphasis on Hispanic and African-American outreach, in hopes of developing a robust get-out-the-vote operation that can compete with Democrats by the 2016 presidential election rolls around.

Steele calls the strategy a waste of money.

"That is stupid," he said. "Ask any state chairman that is going to be honest with you. Do they really want the RNC to pay someone to come into their state and tell them what do? Why not take the cost of that salary and those resources, give it to the state, let them hire their own people, and do the coalitions grassroots work that needs to be done. I don't need an outsider to come in. I don't need someone who is tethered to the Republican National Committee."

Steele said he adopted a model that gave state parties more latitude in formulating their voter outreach plans: "Develop your own plan, and I will fund that plan. Whatever that plan is, if it's reasonable and workable, you will get it, period."

"The key thing about those resources is they are better put to use by the state parties who know their people, who can get a better bang for their buck by using local talent, local vendors, local resources, as opposed to trying to cobble together this national strategy," Steele said. "I don't need these folks coming into Maryland who know nothing about Maryland, looking over my shoulder. Just give me the resources when I ask for them."

Priebus, the current party head, promises that the party's new strategy will be bottom-up rather than one-size-fits-all.

"Our approach at the RNC is to try and be as granular and community-based as possible," Priebus told CNN before his 50 state plan was announced last week.