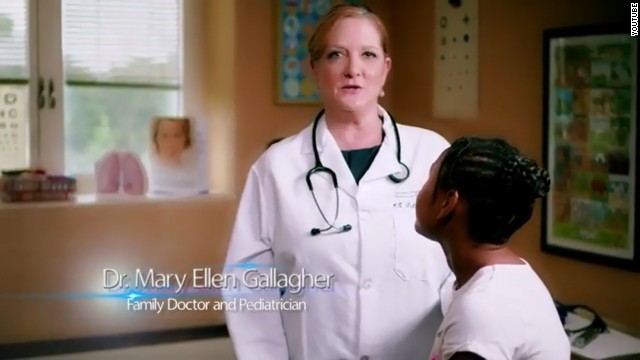 Washington (CNN) – A conservative group which has led the opposition to Obamacare is taking to the airwaves with its largest buy of the year emphasizing some of the questions surrounding the implementation of the health care reform initiative.

In its new spot, Americans for Prosperity features a family physician Dr. Mary Ellen Gallagher saying into the camera "Obamacare has me worried." She goes on to say in the commercial beginning to air Wednesday "Can I still work with parents to decide what is best for their kids or will the government be in the middle of things? Will my time be spent navigating a complicated system or helping people get well?" The commercial ends with the doctor stating "What will happen to my patients if I have to close my practice? I think there are still a lot of questions."

The buy for the commercial is seven figures, and it will air in Ohio and Virginia as well as several others for one week.

"Doctors" is the second spot in a series of ads being launched by the group. Both those in favor and opposed to the health care reform initiative are planning efforts over the upcoming congressional recess as October approaches – that is the time when people can start enrolling in the new health care exchanges set up under the Affordable Care Act.

The White House has intensified its efforts at promoting the enrollment of millions of Americans who don't currently have health care, especially encouraging younger people, who are usually more healthy, as well as trying to publicize information about the reforms and the benefits already seen. Administration officials have said a majority of Americans will not be affected with the new exchanges because they get health care through employers.

Asked in a New York Times interview published over the weekend about how he was going to build support for Obamacare, President Obama said "We're going to implement it."

During his meeting with House Democrats, the new law and some of the benefits were discussed, according to a senior House Democratic aide.

"We are absolutely interested in making sure" members of Congress and the American people have information to answer the critics, White House Press Secretary Jay Carney said.