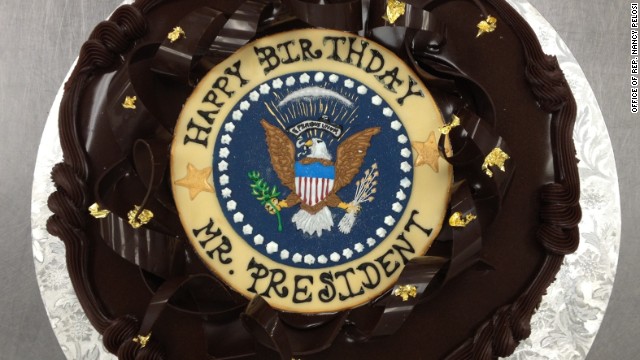 (CNN) – His birthday isn't until Sunday, but President Barack Obama will receive an early surprise Wednesday during his meeting with House Democrats.

There was no word whether the lawmakers would serenade the commander-in-chief with a song.

Organizing for Action, the political group that advocates for the president's agenda, was also getting in on the early birthday action. David Axelrod, a former top White House adviser, sent an e-mail to the group's supporters asking them to sign a card for Obama.

"It doesn't seem like that long ago now, but it's somehow been 21 years since I met a young lawyer named Barack Obama who was running a voter registration drive on the South Side of Chicago," Axelrod wrote. "Even then, it was clear he's a true standout leader, and even better - someone who is in this business for all the right reasons. I'm proud to have had more than a few sleepless nights working for the President - and I know I'm not alone."

He included a link recipients could register their email and zip-code with the group, and then leave their birthday message for Obama.

Obama will turn 52 on Sunday.