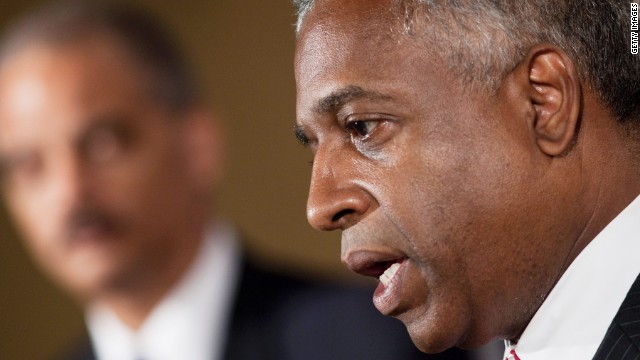 Washington (CNN) - The Senate voted Wednesday to confirm B. Todd Jones as head of the Bureau of Alcohol, Tobacco, Firearms and Explosives, giving the politically controversial agency its first permanent director since 2006.

Senators voted 53-42 to approve Jones - the ATF's acting director since the fall of 2011 - shortly after he received the bare 60 votes needed to clear a key procedural hurdle.

In a rarely seen and dramatic full court lobbying press on the Senate floor, a dozen or so senators from both parties at one point surrounded Murkowski, imploring her to either support or oppose the nomination.

At times, voices were raised and frustrations were evident. Democrats were one vote shy of the 60 needed to move the forward with the nomination, so they were desperate to persuade the independent-minded Alaskan to switch the "no" vote she had already cast to "yes."

After about 30 minutes of heated discussion, Collins broke the logjam by slipping into the middle of the group, putting her arm around Murkowski and whisking her off the floor for relief and private conversation.

About 15 minutes later, Murkowski returned to the floor and told the clerk she would change her vote.

"Lisa's just a friend of mine," Collins told reporters. "I thought we'd have just a nice little chat about what we had to eat last night for dinner."

More seriously, Collins noted, "I was concerned that she was being pummeled by both sides, and thought she might need a little break."

Collins, a rare GOP moderate, said that while she has concerns about Jones, she believes "the way to express those concerns is to vote no on (the actual) nomination rather than voting no" on a procedural matter.

"I think that there are too many filibusters in the Senate," Collins said. "We need to move forward on bills and on nominations and let the Senate work its will."

"It was close," said Sen. Amy Klobuchar, D-Minnesota. "There were a lot of discussions" on the Senate floor about how to find 60 votes. "Sometimes that all gets done ahead of time. This time it was there for the world to see."

In addition to serving as ATF director, Jones, 56, also currently serves as U.S. attorney in Minnesota.

Sen. Chuck Grassley, R-Iowa, was one of the leading congressional opponents of Jones's nomination. Among other things, Grassley expressed concern over Jones's handling of a pair of whistle-blower complaints as U.S. attorney.

Congressional Republicans have also become increasingly concerned about the role of the ATF as the issue of the gun-related violence has become more politically polarizing. Jones's prospects received a boost when the National Rifle Association - always a powerful voice in GOP politics - declined to oppose his nomination.

In a statement released after the vote, Obama welcomed the Senate's final approval but accused Republicans of playing politics and delaying the process.

"For nearly seven years, Senate Republicans had refused to confirm an ATF director – not because they thought the nominees weren't qualified, but because they put politics ahead of the agency's law enforcement mission," he said. "I applaud Senator Reid, Senator Leahy, Senator Klobuchar, and the bipartisan group of senators who broke through that gridlock to give Todd Jones the up or down vote he deserved."