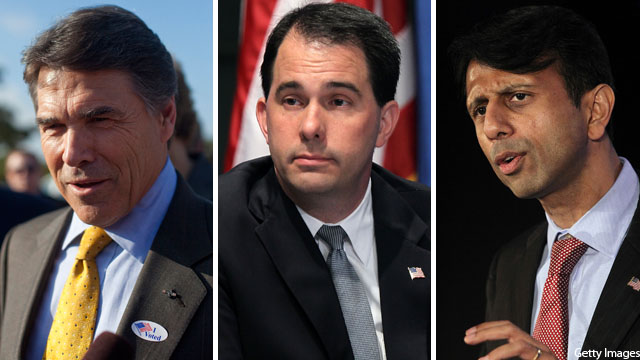 First on CNN: Trio of 2016 Republicans heading to South Carolina

Washington (CNN) - Three prominent Republican governors thought to have designs on the White House will descend on the early primary state of South Carolina later this month to raise money for Gov. Nikki Haley, who is bracing for what could be a tough re-election fight next year.

Wisconsin Gov. Scott Walker, Louisiana Gov. Bobby Jindal and Texas Gov. Rick Perry will appear as "special guests" at an Aug. 26 fundraiser for Haley in Greenville, according to a copy of an invitation to the event obtained by CNN.

The high-dollar confab – the minimum price of admission is $1,000 per couple – is being sponsored by Haley's finance committee, a who's who of influential South Carolina Republican activists and donors.

In other words, the occasion offers Walker and Jindal a prime opportunity to get cozy with many of the state's key power brokers as they lay early groundwork for a possible campaign. As for Perry, he'll have the chance to mend some fences after his ill-fated 2012 bid.

Wynn and Dawson, for instance, were two of Perry's top South Carolina supporters during the 2012 race, but Wynn later defected from Perry's campaign during the Republican primary fight after the Texan launched a series of attacks against Mitt Romney's record in the private sector.

Haley has not officially declared her intention to seek a second term in Columbia, but she has raised almost $2.5 million for her campaign account and is widely expected to announce a re-election bid sometime in the coming weeks or months.

Her Democratic challenger, state Sen. Vincent Sheheen, has a little more than half a million in the bank, but national Democrats are watching the match-up closely and could steer money to his campaign race if the race ends up being as close as it was in 2010, when Haley beat Sheheen by less than five points.

Vice President Joe Biden and Maryland Gov. Martin O'Malley, potential 2016 candidates on the Democratic side, have already been to South Carolina to rally support for Sheheen.

Asked about the fundraiser, Haley adviser Tim Pearson confirmed the event and said the governor is “honored” to welcome Jindal, Walker and Perry.

“Having governors Jindal, Perry, and Walker – all who have overseen incredible economic growth and done so much good for their respective states – come in to support Governor Haley is a huge boon for us,” he said in an email. “It’s a great reflection of the job Governor Haley has done and shows that the results she has delivered for South Carolina are truly resonating.”

The trio of governors won’t be the only potential 2016 candidates to visit South Carolina that day.

While they are busy posing for photos and shaking hands in Greenville, Kentucky Sen. Rand Paul, will be just down the road at the very same time in nearby Anderson, speaking at a conservative forum hosted by Rep. Jeff Duncan.