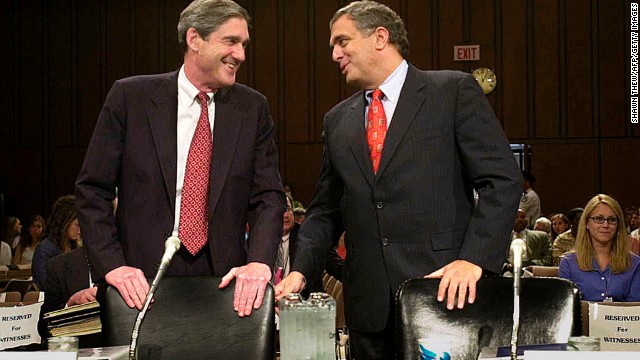 George Tenet, his friend and the former Central Intelligence Agency director, on Thursday offered a rare peek at Mueller battling to keep a straight face during public hearings. Mueller is leaving his post Sept. 4 after 12 years, and the Justice Department held a farewell ceremony to honor him.

Tenet, speaking in the Justice Department's great hall, described his efforts to make Mueller loosen up at congressional hearings.

"You know how before you start testifying witnesses usually cup their hands and everybody thinks we are saying something profound to each other at the moment. Well, Bob and I would be in the middle of the testimony and I would cup my hand and say something to Mueller like, `Bob isn't that the dumbest question you have ever heard in your life?'" Tenet said, getting laughs from a crowd of lawyers and FBI officials at the ceremony.

"Shut up!" Mueller would say.

"And finally it would always be `Bob, are you really going to take that from this guy?'" Tenet would come back.

Officials, including Attorney General Eric Holder, told stories of Mueller's long record of service from his days as a decorated U.S. Marine to his extended tenure at the FBI. This included his lobbying that saved the FBI from being broken up into separated criminal and intelligence agencies after the Sept. 11 terrorist attacks, and his move in the 1990s to abandon a better-paying white collar legal job to become a line prosecutor in Washington during the days when the nation's capital was enduring a spasm of drug violence.

Holder said Mueller upon retirement is leaving the nation safer than he found it.

James Comey, Mueller's successor at the FBI, has won Senate confirmation and takes over next month.