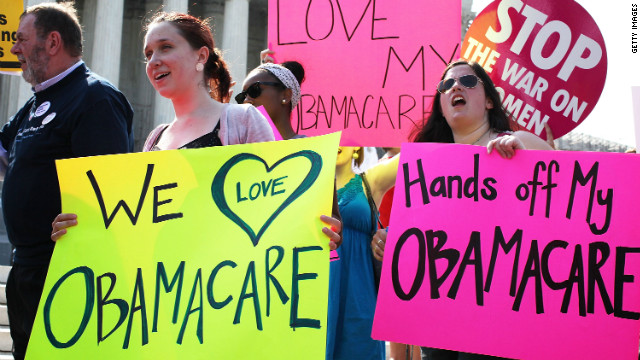 (CNN) – Does this sound familiar? The summer before campaigning begins in earnest for midterm congressional elections, activists hit the road to wage war on President Barack Obama's health care ideas.

If August 2013 is starting to shape up like August 2009 – that steamy month of angry town halls fueled by the then-burgeoning tea party movement – it's because the Affordable Care Act remains in the crosshairs for conservatives, whose commitment to repealing the law endures.

Mindful of how quickly 2009's town halls sparked larger protests, Democrats aren't letting this year's conservative criticism go unanswered - Obamacare's supporters are also hitting the road in August to highlight the law's benefits, while criticizing Republicans for their attempts to stall it.

Sen. Ted Cruz, the tea party-backed Texas Republican who was elected to office last year, will headline an anti-Obamacare event in Dallas, part of a nine-stop Heritage Foundation tour pushing lawmakers to defund the health care law. Cruz's father Rafael will attend all nine events, along with former Sen. Jim DeMint, the tea party godfather who left the Senate at the beginning of this year to become Heritage's president.

The format for the Heritage events? Town halls, which in 2009 were the venue of choice for angry conservatives voicing concern about Obama's plans to overhaul the nation's health care system. Powered by video clips that made their way online, the forums fueled the tea party movement, which had formed earlier that year in response to the Wall Street bailouts and the federal stimulus.

The Heritage tour will start in Arkansas and swing through Dallas, Florida, Tennessee, Alabama, Indiana, Ohio, Pennsylvania and Delaware.

Separately, conservative and tea party groups are planning a three-month bid to convince lawmakers to end funding for the health care law. The "You Fund It, You Own It" push, backed by the Tea Party Patriots and ForAmerica, runs from August to October. And Americans for Prosperity, the conservative group, is running ads and planning action events pushing back on Obamacare.

While 2009's town halls attempted to convince lawmakers to block Obamacare from becoming law, the attempt this year will focus on ending funding for the Affordable Care Act, which was passed along partisan lines in 2010 and deemed constitutional by the Supreme Court last summer.

Some conservative lawmakers – including Cruz and fellow senators Marco Rubio of Florida and Mike Lee of Utah - are using impending budget battles as leverage, vowing to oppose any measure that provides funding for the federal government that includes funding for the health care law.

The current measure funding the government expires September 30 – setting up another Capitol Hill budget battle between Republicans and the White House.

Matt Kibbe, president of the conservative grassroots group FreedomWorks, said the issues mounting in the next couple of months that involve budget battles, health care, and the IRS will create “the perfect storm” ahead of the 2014 midterm elections and re-energize the right.

His group had a significant role in bringing attention to the 2009 town halls, and they plan to publicize them again this August with a crowd-sourced website that encourages constituents to post their representatives’ town hall schedules online.

While Kibbe hopes the town halls will be well attended, he doesn’t agree that the emotions displayed at the events three years ago could be classified as “anger.”

“I would call it righteous frustration,” he said.

But not all Republicans want to shut down the federal government over Obamacare.

Sen. Tom Coburn, an Oklahoma Republican said on Tuesday that while he wants to defund Obamacare, threatening a government shutdown isn't the best way to the law.

"I praise my colleagues in what they're trying to do," Coburn said. "What we need to do is delay (Obamacare) and get it to a point where we can kill it."

Other senators who have voiced opposition to attempts to defund Obamacare include John McCain, Bob Corker, and Lindsey Graham – all considered more establishment politicians, compared to relative newcomers in Rubio, Lee and Cruz.

President Obama on Tuesday criticized Republicans in Congress who would "hurt a fragile recovery by suggesting they wouldn't pay the very bills Congress rang up, and threaten to shut down the people's government if they can't shut down Obamacare."

That sentiment will be adopted by Obamacare's supporters as they attempt to counter conservative efforts to vilify the law. A joint effort between Americans United for Change and Protect your Care will hit states to promote the benefits of the law though events and protests of conservative events.

They'll highlight the repeated efforts by Republican in Congress to repeal all or part of the law – the latest which was due to come on Friday.

"Republicans have made it all they want to do in Congress," Americans United for Change president Brad Woodhouse said. "They've overplayed their hand. They don't want to do anything on jobs, immigrations, or gun violence – just strip away millions of people's health care benefits."

Organizing for Action, the political advocacy group formed from Obama's campaign apparatus, will also hit the road in an attempt to counter conservatives over the August congressional recess. They begin on Sunday, holding house parties and community outreach events timed to coincide with Obama's 52nd birthday.

A CNN/ORC International poll taken in mid-May showed a majority of Americans – 54% - oppose the health care law, with 43% saying they favor it.

When the opposition to the law is broken down, 35% said they opposed Obamacare because it is too liberal, while 16% said it is not liberal enough.