5 political stories to watch in the week ahead

Washington (CNN) - It's August, the dog days of summer, and President Barack Obama and Congress are making a break from the nation's capital. The president heads West for a quick trip on the economy that includes a visit with Jay Leno, while federal lawmakers begin their five-week summer recess.

Mitt Romney, a couple men who might have hopes of being the next Republican presidential nominee, and a first-term congressman from Arkansas also will be political stories in the week ahead.

(CNN) - An intercepted message among senior al Qaeda operatives in the last several days raised alarm bells that led to the closing of embassies and consulates Sunday across the Middle East and North Africa, CNN has learned.

CNN has agreed to a request from an Obama administration official not to publish or broadcast additional details because of the sensitivity of the information.

Tweet of the Day: FLOTUS wishes POTUS a 'Happy Birthday'

(CNN) - First lady Michelle Obama gave a special shout-out to her husband on Twitter for his 52nd birthday, and noted a certain change in his appearance, as well.

Happy birthday, Barack! Your hair's a little grayer, but I love you more than ever. –mo pic.twitter.com/xxYTA9cMK7

GOP lawmakers split on threat to shut down government over Obamacare

(CNN) – After members of Congress return from their monthlong recess, Washington will brace for yet another budget battle that entails reaching an agreement to continue funding the government beyond September 30.

The debate will probably center on whether Republicans should attach a measure to defund Obamacare to the upcoming spending bill. But Democrats and some Republicans argued Sunday morning that taking such an approach will almost guarantee more gridlock in Congress.
END_OF_DOCUMENT_TOKEN_TO_BE_REPLACED

Responding to new challenger, Graham vows to be like Ronald Reagan

(CNN) – Sen. Lindsey Graham of South Carolina, who's up for election to a third term next year, talked about his conservative credentials Sunday, one day after he got another challenger from the right in the 2014 Republican primary for his seat.

"I will continue to be Lindsey Graham, a solid fiscal and social conservative who wants to solve problems. I think that's the future of the Republican Party," he said on CNN's "State of the Union."
END_OF_DOCUMENT_TOKEN_TO_BE_REPLACED

Debate over NSA programs gets renewed attention amid terror threat

(CNN) – There's no proof that the current terror threats in the Middle East, North Africa and beyond were uncovered through a federal program that monitors domestic telephone data, Rep. Adam Schiff, D-California, who serves on the House Intelligence Committee, said Sunday.

"There's no indication, unless I'm proved wrong later, that that program which collects vast amounts of … domestic telephone data contributed to information about this particular plot," Schiff said on CNN's "State of the Union."
END_OF_DOCUMENT_TOKEN_TO_BE_REPLACED

On Sunday afternoon, he returned to Washington from the Camp David presidential retreat in Maryland, where he had flown Saturday afternoon after golfing with close friends earlier in the day. Obama turned 52 Sunday.
END_OF_DOCUMENT_TOKEN_TO_BE_REPLACED

(CNN) – One of President Barack Obama’s most vocal critics in the Senate said Sunday that he approves of how the administration is handling the recent terror threats.

Sen. Lindsey Graham, R-South Carolina, also said he plans to continue his trip to Egypt with fellow Republican Sen. John McCain, despite a United States global travel alert amid fears that al Qaeda may launch attacks in the Middle East, North Africa and beyond in coming weeks
END_OF_DOCUMENT_TOKEN_TO_BE_REPLACED 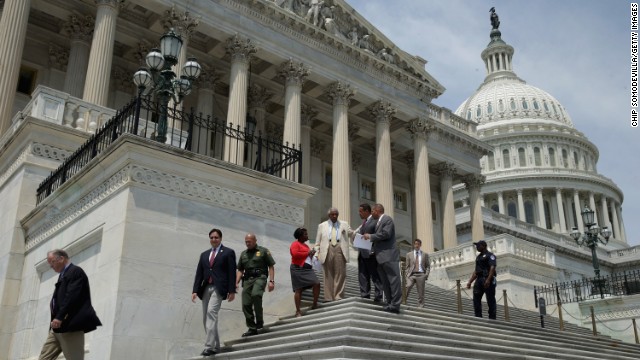 Freshman congressman frustrated by extremists but hopeful of finding middle

"The biggest problem for me is we're voting on extremes. You don't see compromise bills," he said Thursday evening on the east steps of the Capitol after a vote.