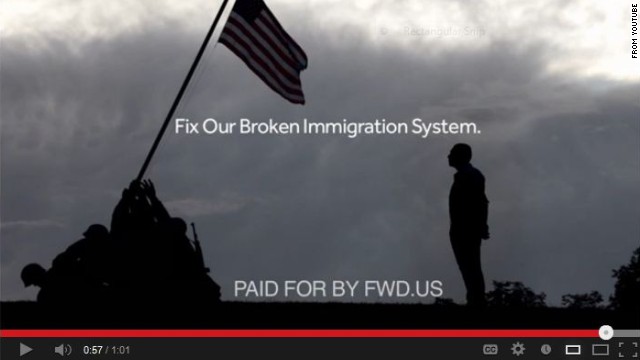 The new ad is called "Serve" and features a young undocumented immigrant named Alejandro Morales, a former high school junior ROTC cadet who dreams of serving as a U.S. Marine but is unable to because of his status, having been brought to the United States illegally when he was seven months old.

"America is the only country I've ever known," Morales says in the ad, which features him standing at attention in front of the iconic Marine Corps Memorial featuring the flag-raising over Iwo Jima during World War II.

The ad is part of a large push for comprehensive immigration reform by advocacy group FWD.us, which was founded by Zuckerberg and other Silicon Valley heavyweights like Microsoft founder Bill Gates.

Among other things, FWD.us is pushing for the so-called DREAM act, which would create a path to citizenship for undocumented immigrants who were brought as children to the United States by their parents.

"Undocumented immigrants already contributing to our communities want to be recognized as Americans, and want the opportunity to continue to serve our country and contribute to its success," FWD.us President and Founder Joe Green said in a statement.

"We hope that by showing Americans the cost of this broken system and the contributions people like Alejandro are already making, they will join with us in supporting real reform."

Morale's story will be featured in a large ad buy, according to Zuckerberg's group, playing online and on-air across the country in places like Phoenix, Chicago and large swaths of Texas and Florida.

Groups promoting and opposing immigration reform have vowed to press their message during Congress's August recess, with ads, advocacy and planned appearances at town halls scheduled across the country.

Immigration reform has already passed the U.S. Senate but faces a far-from certain future in the House of Representatives.

House Republicans have said they want to write their own version of the bill, a version unlikely to include a pathway to citizenship the Senate made for the 11 million undocumented immigrants estimated to be living the in country. Republicans have instead focused on border security, calling a path to citizenship amnesty for law-breakers.