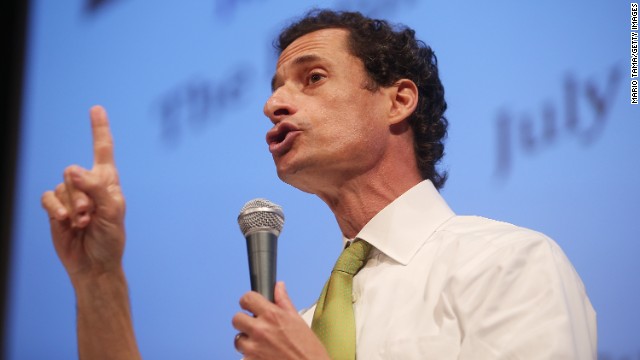 (CNN) - Stopping on the campaign trail for a sidewalk interview, a clearly agitated Anthony Weiner mocked a British reporter Thursday and laughed as she asked him questions.

"It's hard to take you seriously," he said after being asked whether he was pursuing his New York City mayoral bid out of "ambition" or "hunger for the job." He then appears to repeat her question in a British accent.

My full run-in with #weiner http://t.co/fqQFKcZz15

Standing with his hands on his hips, Weiner jokingly sneered as the ITV reporter, Lucy Watson, asked how he plans to carry out his political campaign following his admission last month that he continued to send lewd messages following his 2011 congressional resignation.

Asked if anything could stop him, Weiner replied: "I just have a feeling I've like stepped into a Monty Python bit."

The former congressman has vowed to stay in the race, with a little more than a month to go before the September 10 Democratic primary.

"I don't know, would anything stop me? Now is a rock going to fall on my head?" he continued. "No, nothing is going to stop me. I'm going to win this election."

In the roughly two-minute interview, Weiner struggled to hold eye contact and grew distracted with passers-by on the street.

"Anything else I can do for ITV? You want me to do the weather or something?" he asked.

As the reporter complied, he then turned to the camera to deliver his fake forecast for England.

"It's going to be raining, cloudy and gray. So do what you can guys. Try to keep your head up. Keep a stiff–what is it? A stiff upper lip," he said.

He thanked his campaign volunteers and said he had to leave to go home and feed the baby.

A new poll released Thursday indicated Weiner remains behind three of his opponents in the Democratic contest. He also made headlines earlier in the week for referring to a Republican candidate as "grandpa" during a confrontation shortly before an AARP forum.