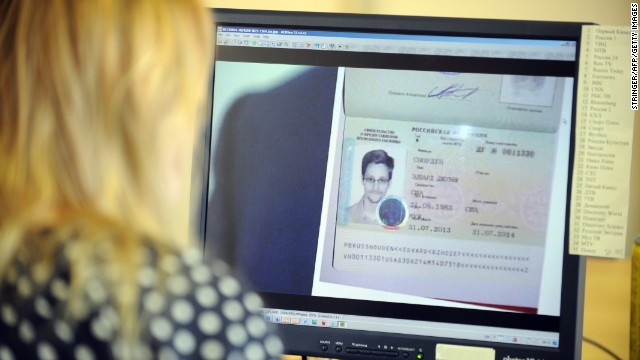 (CNN) – President Barack Obama’s assertion Friday that Edward Snowden was not a patriot for leaking details about top-secret American surveillance programs was brushed aside Sunday by Snowden’s father.

Lon Snowden - who says he is traveling soon to Russia, where his son has been granted asylum - suggested instead that Edward Snowden had put himself at great personal risk in order to inform Americans about the data their government collects.

“My son has spoken the truth, and he has sacrificed more than either the president of the United States or (U.S. Rep.) Peter King have ever in their political careers or their American lives. So how they choose to characterize him really doesn't carry that much weight with me,” he said on ABC’s “This Week.”

King, a Republican who once chaired the House Homeland Security Committee, has called Snowden a “traitor.”

During a news conference Friday, Obama was asked whether he thought Snowden was a patriot for leaking the surveillance information, which showed the National Security Agency collecting massive amounts of metadata on Americans’ phone calls and Internet usage.

“I don't think Mr. Snowden was a patriot,” Obama said.

“The fact is, is that Mr. Snowden's been charged with three felonies,” the president added. “If, in fact, he believes that what he did was right, then, like every American citizen, he can come here, appear before the court with a lawyer and make his case.”

Ahead of the question-and-answer session, the president unveiled new measures to instill greater transparency in government spying programs, though he downplayed the role Snowden played in prompting the new effort.

“I called for a thorough review of our surveillance operations before Mr. Snowden made these leaks. My preference - and I think the American people's preference - would have been for a lawful, orderly examination of these laws; a thoughtful, fact-based debate,” he said.

Among the steps the president announced Friday was a new effort to work with Congress to pursue appropriate improvements of the telephone data program. He also proposed reforming the secret court that approves that phone surveillance, improving transparency to provide as much information as possible to the public, including the legal rationale for government collection activities; and appointing a high-level, independent group of outside experts to review surveillance technologies.

The new steps toward transparency were largely welcomed by lawmakers Sunday, though Lon Snowden argued the plan was “superficial.”

“I believe that's driven by his clear understanding that the American people are unhappy with what they've learned and more is forthcoming,” Snowden said.

During his news conference, Obama described a general mistrust in the government that ignited when the government snooping programs were revealed earlier this summer. Sen. John McCain, R-Arizona, agreed Sunday that Americans - particularly those younger than he or the president - were growing increasingly skeptical of their government’s actions.

“There's kind of a generational change here. Young Americans do not trust this government. Without trust in government, you can't do a lot of things,” McCain said on “Fox News Sunday,” adding that he didn’t disagree with any of the president’s proposals.

Rep. James Clyburn, a South Carolina Democrat, said on CNN’s “State of the Union” that transparency was an important goal, but that more needed to be done in reducing the number of private contractors with access to sensitive government secrets.

“You want to be very, very careful in not just what the president is doing, but with what all of the hired hands may be doing when they're carrying out their duties and responsibilities,” he said.

Two Republicans, however, chided Obama Sunday for not offering a more robust defense of the NSA programs, which they argued had saved many lives and now are being questioned.

Obama “finally came out last Friday trying to come up with ways to salvage the program by window dressing,” said Rep. Mike McCaul, the Republican chairman of the House Homeland Security Committee, on NBC’s “Meet the Press.”

“The problem fundamentally is he's failed to explain these programs which are lawful, which have saved lives, which have stopped terrorist plots,” he continued.

The president has “been silent for the last two months,” King added on CBS’ “Face the Nation.” “He’s allowed the Edward Snowdens and the others of the world to dominate the media and now we have so many people who actually think the NSA is spying on people, is listening to our phone calls, is reading our e-mails.”