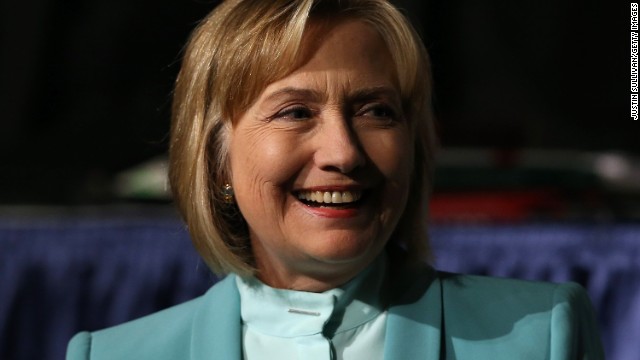 (CNN) – Hillary Clinton's self-imposed absence from the country's political discourse ended Monday when the former secretary of state issued biting criticism of Republican-backed voter ID laws during a speech to a group of lawyers.

Clinton said her appearance at the annual meeting of the American Bar Association marked the beginning of a speaking series she'll embark upon that will also include an address on the United States' national security policies next month in Philadelphia.

Clinton said the September address would focus of issues of "transparency and balance." The former top diplomat had not yet publicaly addressed the classified National Security Agency surveillance programs that were revealed through leaks at the beginning of the summer.

The move into the political realm marks a new phase in Clinton's post-State Department life, which was previously occupied by speeches to global women's organizations and a schedule of paid appearances. She is also writing a diplomacy-focused memoir for release in 2014.

The speeches will likely fuel speculation that Clinton is planning to jump into the race for the 2016 Democratic presidential nomination, where she is considered an early favorite.

In her remarks in San Francisco Monday, Clinton took aim at policies she said were unfairly limiting access to polls for minority voters, and said June's Supreme Court decision gutting the federal Voting Rights Act was a grave mistake. That ruling effectively invalidated a key provision of the 1965 law that gives the federal government oversight of states and localities with a history of voter discrimination.

Clinton said the part of the law which was struck down had played a "such an important role" in the decades since it became law, and argued it was still needed to prevent undue restrictions from being placed on minority voters.

"Not every obstacle is related to race, but anyone who says that racial discrimination is no longer a problem in American elections must not be paying attention," Clinton said. "And despite the best efforts of many well-intentioned election officials, discrepancies and resources across precincts and polling stations still disproportionately affect African-American, Latino, and young voters."

She singled out efforts in Florida to remove noncitizens from its voter rolls – an effort that began, and later stalled, during later year's presidential election, but that the state's Republican governor revived following the Supreme Court's ruling.

Clinton said the effort was likely to "disproportionately affect minority voters and bring back memories of the 2000 election, and the scores of wrongly disenfranchised voters."

A law signed by North Carolina's Republican governor Monday amounted to the "greatest hits of voter suppression," Clinton argued. The measure, which goes into effect for the 2016 elections, includes a requirement that voters present a valid government-issued photo ID in order to cast a ballot.

Like Florida's voter roll effort, North Carolina's new law was only possible after the high court's decision in June.

And she called on the Justice Department to better enforce federal laws that prohibit discrimination at the polls.

"Unless the hole opened up by the Supreme Court's ruling is fixed…citizens will be disenfranchised, victimized by the law instead of served by it, and that progress, that historical progress toward a more perfect union, will go backwards instead of forward," Clinton said.