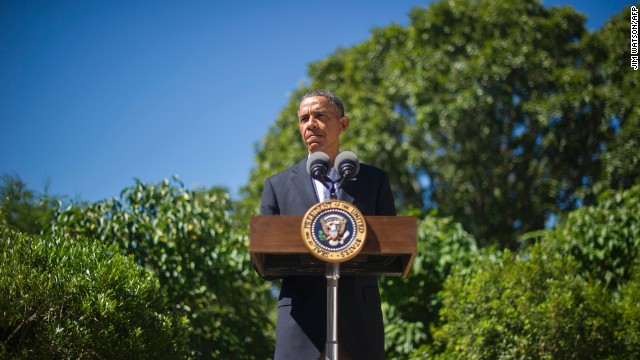 AL QAEDA ON EGYPT: 'I TOLD YOU SO': Peter Bergen, CNN National Security Analyst writes in an opinion piece, “Ayman al-Zawahiri, the Egyptian-born leader of al Qaeda, has seen this movie before: An Islamist party does well at the polling booth only to be overthrown by a military coup that then plunges the country into chaos.. This is what happened in Algeria in 1991. Tens of thousands died in the subsequent Algerian civil war that ripped the nation apart during the 1990s. The lesson that Zawahiri drew from the Algerian war was that participating in democratic elections was strictly for suckers; far better to seize power through violence and then impose Taliban-style sharia … For more on Egypt, scroll down to What Caught Our Eye.

CHRIS CHRISTIE DISSES GOP ‘NAVEL GAZING’: At a closed door meeting of the RNC summer meeting, a source tells CNN’s Peter Hamby that New Jersey Gov. Chris Christie popped two Republicans, Kentucky Sen. Rand Paul and Louisiana Gov. Bobby Jindal. “My job is to win. I believe my job is to win. Our job is not to be college professors,” Christie said. “I'm not going to be one of these people who goes around and calls our party stupid. We need to stop navel gazing. There's nothing wrong with our principles. We need to focus on winning again. … We are not a debating society. We are a political operation that needs to win.”

CHRISTIE ALSO HITS HIS STATE EDUCATION ASSOCIATION: “In New Jersey that bully is the New Jersey Education Association. And you got two choices as a governor. You either sidle up next to them and whisper sweet nothings in their ear or try to hope they don't punch you. Or your second alternative is… you punch them first (applause).”

THE BUZZ: What Bush wants to see a 2016 Clinton run? Scroll down to Hot Sots for the answer.

TRAIL TRIVIA
(Answer below)
Who is the last president to never visit Egypt?

When President Barack Obama stepped to the microphone Thursday on Martha’s Vineyard, the big question was whether or not the president would label the Egyptian military’s government overthrow a coup.

And many experts on U.S.-Egypt relations would say he refrained from using the word because of the implications the word has for the military and humanitarian aid the United States sends to Egypt.

Republicans like Arizona Sen. John McCain and South Carolina Sen. Lindsey Graham, two men who travelled to Egypt earlier this month, have criticized Obama for that decision. But the debate over whether the unrest in Egypt is in response to a coup or not, got us thinking about a great story The Washington Post published in July about the complications of cutting off aid.

“Shutting off the defense materiel pipeline to Cairo would take several years and ensnare the United States in an unprecedented contractual quandary,” Ernesto Londoño and Holly Yeager wrote. “Since the early 1980s, the United States has granted Egypt an extraordinary ability to place orders with American defense contractors that are worth far more than Congress has appropriated for military aid, according to U.S. officials.”

The story continues: “Egypt — the only country besides Israel that is granted such a privilege by Washington — has effectively been given a credit card with a maximum limit in the billions of dollars, experts say.”

Leading CNNPolitics: Obama warns of further steps in Egypt, cancels military exercises
President Barack Obama announced Thursday that the United States has canceled joint military training exercises with the Egyptian military and alluded to the fact that his administration could take further steps to deal with the violence in Egypt. – Dan Merica

Gut Check Full Service: Senior White House official: Obama's thinking on Egypt… Discussions about canceling the joint U.S.-Egyptian military exercise known as “Bright Star” began in June, around the time the Obama administration canceled the delivery of four F-16 fighter planes to the Egyptian Air Force as a way of registering displeasure and concern with the Egyptian military’s behavior during and after the ouster of former President Mohammed Morsy, a senior White House official told CNN. – Jake Tapper

Leading Drudge: Rise Of The Brotherhood
Supporters of Egypt's Muslim Brotherhood stormed and torched a government building in Cairo on Thursday, while families tried to identify hundreds of mutilated bodies piled in a Cairo mosque a day after they were shot dead by the security forces. – Tom Perry and Alexander Dziadosz for Reuters

Leading HuffPo: We 'Strongly Condemn' Attacks* *That We Are Paying For
President Barack Obama spoke out on the crisis in Egypt on Thursday, saying he's "concerned" by recent events. "The United States strongly condemns the steps that have been taken by Egypt's interim government and security forces," Obama said. "We deplore violence against civilians."

Leading Politico: Paul, Dems call for halt aid to Egypt
President Barack Obama’s decision to scrap a joint training exercise with the Egyptian military didn’t go far enough for Rand Paul. Because Obama has yet to suspend the $1.3 billion in annual military aid to Egypt, the Kentucky senator said the administration is continuing to support violent Egyptian armed forces despite Obama’s denunciation Thursday of the hundreds killed in Egypt amid ongoing unrest. – Burgess Everett

Leading The New York Times: In Rebuke to Egypt, Obama Cancels Joint Military Exercises
Speaking from Martha’s Vineyard on Thursday, President Obama warned of future steps but made no mention of cutting off military and economic aid to Egypt. – Mark Landler

- State still evaluating aid to Egypt -
JEN PSAKI, STATE DEPARTMENT SPOKESWOMAN, IN A BRIEFING WITH REPORTERS: “We will continue to assess and review our aid in all forms. … I don't think anyone in the government thinks that simply the cancellation of Bright Star is going to change, change actions on the ground. However, given the events of the last 36 hours, this was, this did impact our decision-making about aid and we'll continue to review.”

- Gingrich: Hillary Clinton may ‘defeat herself’ –
CROSSFIRE CO-HOST NEWT GINGRICH IN AN INTERVIEW WITH CNN: “First of all Hillary Clinton may beat Hillary Clinton. … If she runs around the country and adopts a series of left-wing ideas in order to preempt the primaries, she may isolate herself so much from the average American that she defeats herself.”

- Steve King: 2012 was *not* about immigration -
REPUBLICAN REP. STEVE KING OF IOWA IN AN INTERVIEW WITH CNN: “Last year, almost everybody at my conference would have agreed with me on this immigration issue. This year it seems after the presidential election a spell has been cast over a good number of Republicans and they seem to think the presidential election was about immigration. I'd ask them: find me that debate between Mitt Romney and Barack Obama that addressed immigration. I don't remember it, I can't find it.”

- Hagel advocates keeping chain of command in control -
SECRETARY OF DEFENSE CHUCK HAGEL IN A WRITTEN STATEMENT: “Eliminating sexual assault from the armed forces remains one of the Department of Defense's top prioritiest.”

jennifer bendery (@jbendery)
Michelle Obama to Parade: "I want to be this really fly 80-, 90-year old."

Dylan Byers (@DylanByers)
"The Post just got hacked by the Syrian Electronic Army. Here’s who they are." http://www.washingtonpost.com/blogs/the-switch/wp/2013/08/15/the-post-just-got-hacked-by-the-syrian-electronic-army-heres-who-they-are/ …

According to the State Department archives, Reagan did not visit the Middle East once as president, although he did travel extensively through Asia, South America and Europe.

President Barack Obama visited Egypt on June 4, 2009, where the president met with Egyptian President Hosni Mubarak, toured the Giza Pyramids and delivered a sweeping speech to the Muslim world at Cairo University.