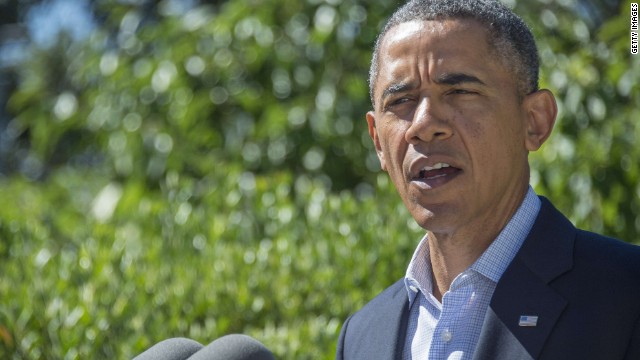 No, the administration still won't use the term "coup" to describe the forced ouster of Egypt's democratically elected government. But, in the president's words, "the United States strongly condemns" the action of an interim government it was counting on to take a measured path after seizing power.

"Instead we've seen a more dangerous path taken through arbitrary arrests, a broad crackdown on Mr. Morsy's associates and supporters and now, tragically, violence that's taken the lives of hundreds of people and wounded thousands more," the president said Thursday morning during a break from his August vacation.

A day earlier, it was Secretary of State John Kerry delivering the criticism of the military-led interim government. To the tough rhetoric the president added this: a decision to cancel planned joint military exercises next month.

That sanction is one of the modest options the administration has as it tries to hastily reposition its Egypt policy. The bigger message would be to suspend the $1 billion plus in annual US aid to Egypt, a step the administration is loathe to take because it believes that crucial support is part of its leverage in a diplomatic crisis like this.

But calls for revoking that aid are already increasing, and will even more so if the military government does not find a way to diffuse the crisis.

"The law is very clear," Republican Sen. Rand Paul of Kentucky said Thursday. "Everyone here in Congress can read. They recognize that the law says when there is a military coup, the aid must end."

The administration says that aid is "under review," and is hoping the situation on the ground improves before the push to impose more meaningful sanctions gains more momentum.

President Obama put it this way: "While we want to sustain our relationship with Egypt, our traditional cooperation cannot continue as usual when civilians are being killed in the streets and rights are being rolled back."

In that same statement, the president said, "We don't take sides with any particular party or political figure."

But the administration in essence had taken sides – with the military it is now condemning.

Not long ago, there was cautious optimism in the senior Obama administration ranks, as more moderate figures agreed to take prominent roles in a transitional government and US regional allies, Qatar and the United Arab Emirates chief among them, tried to broker between and among the competing Egyptian political factions.

But the violent crackdown in recent days, and the administration's attempt at repositioning itself now is evidence those hopes for moderation and a clear path to new elections were perhaps unrealistic.

After 30 years of an autocratic Mubarak regime, Miller believes the Egyptian military is too powerful and entrenched to embrace major democratic reforms, and the society too fractured and without the history or the political institutions to sort through its current crisis peacefully.

And so Miller sees few good options for what he describes as a consistently "risk averse" American president in the Middle East whether the issue be Egypt, Syria, Iran or the Arab-Israeli conflict.

"This is not an easy one," Miller said. "You want clarity, find another region."