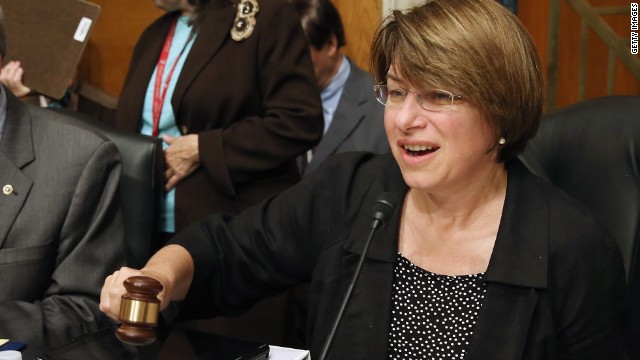 (CNN) – Democratic Sen. Amy Klobuchar of Minnesota didn’t shy away from Iowa’s presidential politics while giving the keynote address at a fundraiser on Friday in Iowa.

“You are the state that has gained notoriety for picking the country's presidents, and we are the state - thanks to the great Hubert Humphrey and Walter Mondale - that supplied the country with vice presidents,” she said at the 10th annual North Iowa Democratic Wing-Ding in Clear Lake.

“In fact, it is a longtime tradition in Minnesota that new moms, gushing with pride, bounce their babies on their knee and say one day you can grow up to be vice president,” she joked.

Klobuchar, the first woman from Minnesota elected to the U.S. Senate, has been floated by some as a potential presidential contender. EMILY’s List put the second-term senator on its list of female lawmakers who could be viable candidates for the White House.

With that, the 2016 chatter was abuzz Friday, as political observers keep a close eye on visits to the Hawkeye State by any potential presidential candidate. Iowa holds the designation of being the first state in the country with a contest in the presidential primary and caucus calendar every four years.

Shortly before Klobuchar took the podium, Iowa Democrats gave Hillary Clinton an award, which was accepted in absentia. Klobuchar praised Clinton at the top of her remarks, but also peppered her speech with plenty of compliments about her neighboring state.

“I literally am only two hours from here, and I can see Iowa from my porch,” she said.

Drawing more connections, she noted that Minnesota and Iowa both have many lakes, hailed the two states for legalizing same-sex marriage, and listed other values the Midwestern states share.

With much of Iowa’s Democratic class present at the event, Klobuchar mostly focused on Rep. Bruce Braley, who is seeking to replace retiring Democratic Sen. Tom Harkin. Klobuchar and Braley worked together on military sexual assault legislation in Congress.

But Klobuchar, who was elected to the Senate in 2006, also spent a significant portion of time blasting House Republican “ideologues” and “tea partiers” for blocking farm, infrastructure and immigration legislation–bills that have key stakeholders in Iowa and Minnesota.

She also spent time introducing herself to Iowa voters, talking about her Slovenian heritage and her grandfather, who was an iron ore miner, as well as her mother, a longtime teacher, and her father, a newspaperman. The senator further delved into what got her into politics: a fight with an insurance company after it kicked her out of the hospital while her newborn daughter was still in intensive care.

Wrapping up her speech with more Iowa themes and circling back to her grandfather’s experience in the mines, she made a final plea to the audience to get out the vote for Braley in next year’s midterms.

“You're the Hawkeye state, right? For generations, you've never backed down from a challenge. Your ancestors settled a windblown prairie and turned it into a place that feeds the world. You've given the country pioneers and leaders in political courage,” she said. “This is what I’m asking you to do: Just like my grandpa would do everyday…put those boots on again, because you guys do it well. Put those hard hats on again, square your shoulders, and get ready for this next election.”