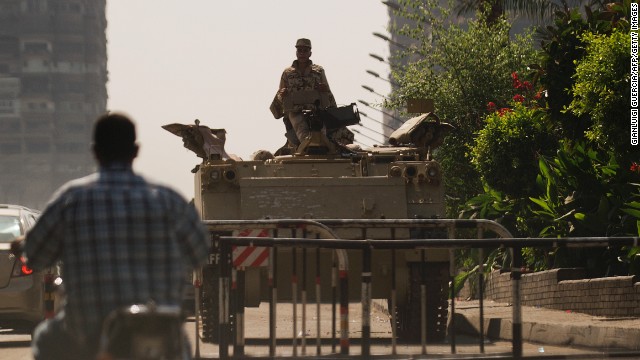 Washington (CNN) - More than half of all Americans say the U.S. should cut off military aid to Egypt, according to a new poll.

And a Pew Research Center survey conducted Thursday through Sunday, as violence surged between the country's ruling military and supporters of ousted President Mohamed Morsy, also indicates that half the public says President Barack Obama hasn't been tough enough towards Egypt's military.

More than 900 people have been killed in violence in Egypt over the past week. Last month the Egyptian military installed an interim government after deposing Morsy, who in 2012 became the country's first democratically elected president.

According to the poll, 51% of Americans say it's better for Washington to cut off military aid to Egypt to put pressure on the government, with 26% saying it's better to continue military aid to the government in order to maintain influence in Egypt and nearly one in four unsure. The Middle East country receives nearly $1.3 billion each year of U.S. taxpayer money, with much of that aid going to the military.

In a statement Thursday, President Barack Obama refrained from calling Morsy's overthrow a coup, which would have implications for the aid Cairo receives. "While we want to sustain our relationship with Egypt, our traditional cooperation cannot continue as usual when civilians are being killed in the streets and rights are being rolled back," said Obama as he announced that the U.S. was canceling a bi-annual joint military exercise with Egypt.

Sunday, on CNN's "State of the Union with Candy Crowley," GOP Sen. John McCain of Arizona said it's time for the U.S. to cut off the aid.

Half of those questioned said that the president has not been tough enough toward the Egyptian military in responding to the violence against anti-government demonstrators, with only 6% saying Obama's been too tough, 12% saying his response has been about right and 32% saying they were unsure.

While there was little partisan divide over cutting aid to Egypt, 63% of Republicans said Obama was not tough enough. That number drops to 47% among Democrats and 46% among independents.

Just 22% of Americans said they are following the news about the violence in Egypt very closely, down from the 39% who said the same thing in February 2011, when then-President Hosni Mubarak stepped down after massive protests.

The Pew Research Center poll was conducted August 15-18, with 1,000 adults nationwide questioned by telephone. The survey's overall sampling error is plus or minus 3.7 percentage points.