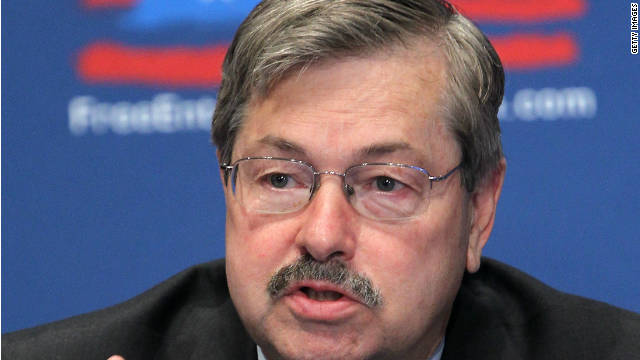 Washington (CNN) - A quartet of Republicans said to be eyeing 2016 presidential bids will get a chance next month to see how the competition is romancing the influential governor of Iowa.

Republican Terry Branstad is hosting a fundraiser on Sept. 24 at a Washington, D.C., GOP hot spot, the Capitol Hill Club, according to an invitation obtained by CNN.

A slate of heavy hitters is expected to attend, including Sens. Ted Cruz of Texas, Rand Paul of Kentucky and Marco Rubio of Florida, and Gov. Scott Walker of Wisconsin.

Also listed on the invitation are other potential GOP presidential hopefuls including New Jersey Gov. Chris Christie, Louisiana Gov. Bobby Jindal and Wisconsin Rep. Paul Ryan. But all three are unable to attend.

Former Mississippi Gov. Haley Barbour, who chaired the Republican National Committee in the Nineties and eyed a presidential bid of his own in 2012, will be there, as will all the Republican members of the Hawkeye State's congressional delegation.

The reception will bring in money for Branstad's re-election bid next year and will cost attendees $500 and sponsors $1000.

There's a separate dinner after on Capitol Hill at the home of Ron Kaufman, a lobbyist with Dutko Worldwide who doubles as an RNC committee member. Kaufman was a key player in both of Mitt Romney's presidential bids. Attending the more intimate dinner will cost donors $5,000 to attend and $10,000 to chair.

As the pre-primary process ahead of the 2016 presidential election heats up, Branstad is certain to play a role in the first-in-the-nation caucuses, and will likely hold many events for the Republican candidates. His potential endorsement could carry weight with a wide swath of Iowa Republican voters, meaning many of the candidates will begin courting him for support as early as possible.