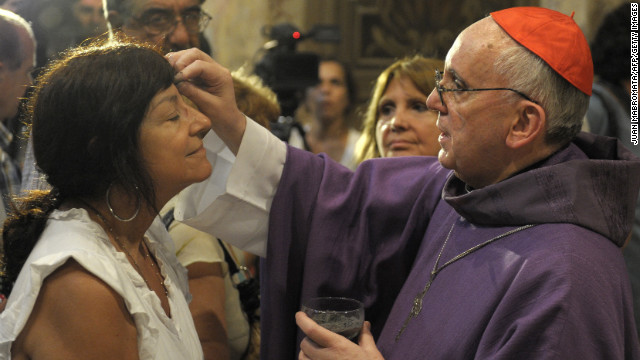 HOLY MARKET WATCH: NASDAQ trading suspended for 3 hours due to a “trading glitch.” In the second significant trading glitch this week, most major exchanges were forced to halt trading in more than 2,700 Nasdaq-listed stocks for several hours Thursday. … It's yet another black eye for a stock market that has become increasingly automated. It's also another blow to NASDAQ, which has been under intense scrutiny since trading issues at its exchange marred the initial public offering of Facebook. NASDAQ attributed the problems to technical issues at a central clearinghouse known as the "UTP SIP," which is the security information process where 13 public exchanges send bid and offer prices on NASDAQ -listed stocks.

TRAIL TRIVIA
(Answer below)
Who was the last sitting president to speak at the University of Buffalo?

Note to all Catholic lawmakers: expect to be getting a call from your local archdiocese.

With the goal of urging the House to pass a comprehensive immigration reform bill, the Catholic Church is pushing immigration reform in the pews and targeting Catholic lawmakers – particularly Republicans – who may be on the fence over the politically tenuous bill.

The movement, which was first reported in The New York Times, (LINK) will include coordinated immigration reform sermons on September 8, as well as targeted messaging of Catholic lawmakers, including House Speaker John Boehner and Rep. Paul Ryan, the GOP’s 2012 vice presidential candidate. http://www.nytimes.com/2013/08/22/us/politics/catholic-leaders-to-take-immigration-push-to-the-pews.html?pagewanted=all

“It is a critical time for the fate of the bill,” Kevin Appleby, director of migration policy at the United States Conference of Catholic Bishops told Gut Check. “The House is dragging its feet and a lot of those who are on the fence are Catholic. They need to hear the message of the church on this.”

After the Senate passed an immigration reform bill, the House left Washington for vacation in July after not bringing up the plan. Furthermore, many Republicans cast doubt on any immigration bill passing.

The Catholic Church on the other hand has been vocal on this issue. “We pray for a heart which will embrace immigrants. God will judge us upon how we have treated the most needy,” Pope Francis tweeted in July.

For the church, embracing immigration reform serves two purposes, said Appleby: supporting the gospel and responding to “the institutional issues of the church.”

Hispanics – a group widely associated with immigration reform – make up nearly 40 percent of Catholic Church. And according to church figures, since 1960, 71% of the U.S. Catholic population growth has been due to the growth in the number of Hispanics in the U.S. population overall.

“We would be derelict in our duties,” said Appleby, “if we didn’t respond to people in our pews that need our help.”

Leading CNNPolitics: McConnell sees 'tipping point' on Egypt aid
Senate Republican leader Mitch McConnell said Thursday he sensed a “tipping point” because of the Egyptian military's behavior and predicted a vote soon to block US military aid even though a proposal to do just that was roundly defeated only weeks ago. – John King

Leading Drudge: Desperate Retailers Start Xmas Sales In August!
Even before the school bells are ringing for many families, retailers are sounding sleigh bells. Yes, that's right. With 120-plus shopping days left, stores are already talking up their holiday offers. – Kelli B. Grant for CNBC

Leading HuffPo: The Hostage Takers
Seemingly conceding that shutting down the government in order to defund the president's health care law would be a dangerous political gamble, House Republican leadership is now looking at the idea of using the debt ceiling as a pressure point instead. – Sam Stein

Leading Politico: DOJ to sue Texas over voter ID law
Attorney General Eric Holder will sue to challenge the Texas voter ID law, the Justice Department announced Thursday. The Justice lawsuit will allege that the Texas law violates Section 2 of the Voting Rights Act, which was among the elements of the law that remains in effect after the Supreme Court invalidated the preclearance requirements in June. – Reid Epstein

Leading The New York Times: Obama Vows to Shame Colleges Into Keeping Costs Down
Promising to eventually use federal student aid as leverage, President Obama said, “We can’t price the middle class and everybody working to get into the middle class out of college.” – Michael Shear

- ‘I am Chelsea Manning’ -
BRADLEY MANNING, ON NBC’s TODAY SHOW: “I want everyone to know the real me. I am Chelsea Manning. I am a female. Given the way that I feel, and have felt since childhood, I want to begin hormone therapy as soon as possible.” LINK
http://www.cnn.com/2013/08/22/us/bradley-manning/index.html?hpt=hp_c2

NOT ON UNCLE SAM’S DIME: “The Army does not provide hormone therapy or sex-reassignment surgery,” Lt. Col. Justin Platt told CNN on Thursday.

- Obama: School loan debt may not get paid back -
PRESIDENT BARACK OBAMA IN A SPEECH AT THE UNIVERSITY AT BUFFALO: “Our economy can’t afford the trillion dollars in outstanding student loan debt, much of which may not get repaid because students don’t have the capacity to pay it. We can’t price the middle class and everybody working to get into the middle class out of a college education. We are going to have to do things differently.”

- Climate change ‘denialists,’ alcoholic fathers and Al Gore -
FORMER VICE PRESIDENT AL GORE IN AN INTERVIEW WITH THE WASHINGTON POST: “The conversation on global warming has been stalled because a shrinking group of denialists fly into a rage when it’s mentioned. It’s like a family with an alcoholic father who flies into a rage every time a subject is mentioned and so everybody avoids the elephant in the room to keep the peace. … Many Republicans who’re still timid on the issue are now openly embarrassed about the extreme deniers.”

- ‘Prison Break’ actors turns Russia down -
ACTOR WENTWORTH MILLER IN A LETTER TO THE ST. PETERSBURG INTERNATIONAL FILM FESTIVAL: “Thank you for your kind invitation. However, as a gay man, I must decline. I am deeply troubled by the current attitude toward and treatment of gay men and women by the Russian government. The situation is in no way acceptable, and I cannot in good conscience participate in a celebratory occasion hosted by a country where people like myself are being systematically denied their basic right to live and love openly.”

Beau Biden (‏@BeauBiden)
On our way home! Can't wait to get back. Thank you, Houston. -bb pic.twitter.com/PePcFS7Rru

Arwa Damon (@arwaCNN)
The one video from Syria’s alleged chemical weapons attack that everyone should watch http://wapo.st/183YU7

Samantha Power (@AmbassadorPower)
Reports devastating: 100s dead in streets, including kids killed by chem weapons. UN must get there fast & if true, perps must face justice.

President Barack Obama addressed an audience of students at the University at Buffalo today – and in doing so, became the first president to speak there since Millard Fillmore in 1853.

Fillmore, the 13th president and possibly the most forgotten, traces a great deal of his pre-presidential history to Buffalo. As a young lawyer born in New York, Fillmore learned about being a lawyer while working – and studying for the bar – at a firm in Buffalo.

Years later, in 1846, Fillmore founded the school. At the time, it was started as a private institution but is now the largest school in the New York state university system.

In 1853, shortly before being succeeded by Franklin Pierce, Fillmore spoke at the university.

Congrats to Erin (@Erin_in_AR) for correctly answering today’s Gut Check trivia question. A lot of incorrect answers on this one – nice work, Erin.