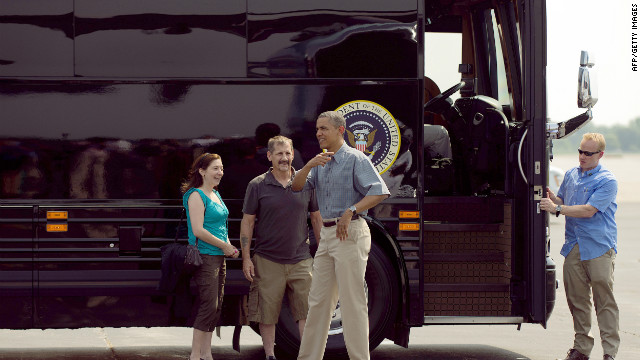 Complaining that "college has never been more expensive," the president said to students at the University at Buffalo that "a higher education is the single best investment you can make in your future."

But he added that over the last three decades "tuition has gone up 250%, income has gone up 16%." As a result, Obama pointed out, the "average student owes 26,000 dollars" in debt upon graduation.

The president said he intends to focus on proposals aimed at curbing the rising cost of higher education, adding "a higher education is the single best investment you can make in your future."

Later in the day, Obama spoke at a high school in Syracuse, again offering proposals he said would make college more affordable to a crowd of students and teachers.

He says the plan will have three main goals.

"We're gonna start rating colleges. Rate them on who is offering best value so students and taxpayers can get the best bang for your buck," Obama said in Buffalo.

Obama also said his plan would "jumpstart new competition between colleges" and would "make sure that if you have to take on debt...that you have ways to manage and afford it."

In his speech, he hit Republicans, saying affordable college and a better economy aren't the high priorities in Washington.

"Rather than keeping focus on a growing economy that creates good middle class jobs, we've seen a faction of Republicans in Congress suggest that maybe America shouldn't pay its bills that have already been run up, that we should shut down government if they can't shut down Obamacare," he said. "That won't grow our economy, that won't create jobs."

Earlier Thursday, the White House released details of the plan saying the "financial aid to college value" plan is based on a new ranking system to be carried out by the Department of Education.

The proposal also advocates for a "pay as you earn" system for the repayment of debt, by which borrowers would be able to "cap their federal student loan payments at 10 percent of their monthly income."

Currently, this option is only available to those students who began taking on student loans after 2008, or who have not borrowed since 2011.

Additionally, the president's plan recommends tying academic progress to the distribution of student aid, specifically suggesting that students "complete a certain percentage of their classes before receiving continued funding," which the White House says would encourage more students to graduate on time, thus incurring less debt.

As he made his way from Buffalo to Syracuse Thursday, Obama paid a visit to a restaurant in Rochester, and stopped at in Seneca Falls, New York, the site of an historic 1848 convention on women's rights. While there, he presented a copy of a measure he signed, the Lilly Ledbetter Fair Pay Act of 2009.

The White House confirmed that Vice President Joe Biden will join the president in Scranton, Pennsylvania for a final stop on Friday.

Student loans – another critical element in the cost of higher education – were a topic of fierce debate before Congress took its August recess.

In the end, legislation was passed keep interest rates on loans down, but only after intense negotiations and gridlock that forced the law to be enacted retroactively, since lawmakers were unable to come to a consensus before rates rose.

The Republican National Committee criticized the bus tour, sending out an email to journalists purportedly from, "the desk of a lame duck president." The press release continued, "[President] Obama officially embraces his lame duck status doing what he does best – giving another speech with no record to show for it."