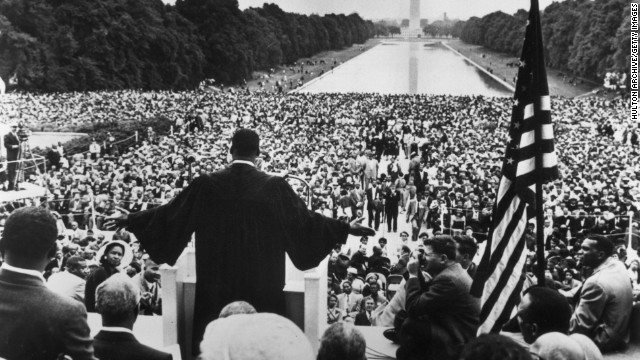 Poll: Are you living King's dream?

Washington (CNN) - Fifty years after Martin Luther King Jr. gave his historic "I have a dream" speech, half the country says "a lot more" needs to be done in order to reach racial equality, according to a new national poll.

And the survey, by Pew Research Center, indicates a wide partisan divide over progress towards racial equality.

There's also a racial divide, with nearly eight in ten black respondents but less than half of Hispanic and only 44% of white respondents saying "a lot more" needs to be done.

"Blacks are much more downbeat than whites about the pace of progress toward a color-blind society. They are also more likely to say that blacks are treated less fairly than whites by police, the courts, public schools and other key community institutions," says a release by Pew Research Center.

August 28 is the 50th anniversary of the "March on Washington" and King's historic address. Hundreds of thousands gathered in the nation's capital for the rally that became a key moment in the struggle for civil rights in the U.S.

The Pew Research Center poll was conducted August 1-11, with 2,231 adults nationwide questioned by telephone. The survey's overall sampling error is plus or minus 2.5 percentage points.