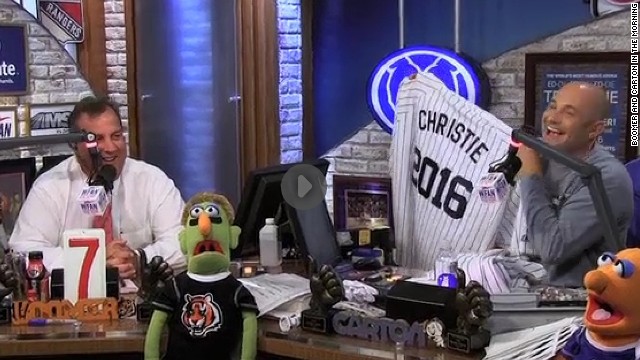 (CNN) – New Jersey Gov. Chris Christie – a lifelong fan of the New York Mets - wasn't ready for a conversion to the more successful Yankees on Monday.

During the Republican governor's guest hosting stint on WFAN's morning sports show "Boomer and Carton in the Morning," host Craig Carton offered to lead a "conversion ceremony" for Christie.

But as Carton pulled out a Yankee's jersey for Christie to try out, the Garden State governor resisted.

"There's no chance," Christie said, looking at the pinstripes skeptically.

When Carton showed Christie the back – emblazoned with "Christie 2016" – the potential Republican presidential candidate dug his heels in.

What about a second Yankee jersey, marked "President Gov. Christie 2016?"

"There's no chance I'm ever putting this on or hanging this anywhere," he declared.